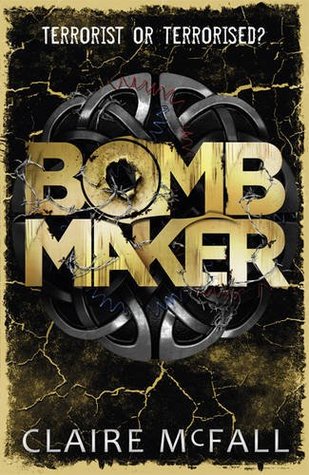 Goodreads Synopsis: The English government have closed the borders with their Celtic neighbours. Any Celt found in England is branded with a tattoo, found twice they are executed. Scottish Lizzie is the ‘property’ of psychopathic London gang boss Alexander. Can Lizzie escape Alexander’s deadly grip and at what price her betrayal?

My Review (WARNING: Contains one spoiler, third paragraph!): Bombmaker was so thrilling! I was so excited to read more from Claire McFall, after loving Ferryman last year. Ferryman was a paranormal mystery: Bombmaker is very different. It stands out as anoriginal, thought-provoking dystopian, which is amazing because there’s a bit of a Dystopia craze at the moment.

It’s a dystopian vision of England, where the economic crisis has gotten worse; and the country has taken drastic measures by shutting foreigners out. If you’re a Celt, found without a Visa in England, you’re tattooed on the cheek; found a second time, and you’re shot. Lizzie is a tattooed Celt, living life dangerously in England, but under ownership of a psychopathic criminal mastermind, Alexander. Alexander was a terrifying antagonist… the way he used Lizzie as a servant, and his criminal organisation… it all gave me the shivers!

Lizzie was instantly likeable. I felt so awful for her from the first chapters, where Claire shows us what torture she’s under, forced to work for Alexander. She has a talent for making bombs, which is a main reason why she’s useful for him, and she’s also quite rebellious. I loved that side of her. Lizzie was relatable, brave and a really well developed character. I felt like I was living her story in real life, thanks to Claire’s writing and her realistic personality. The only thing I kind of didn’t like about her, was that she seemed to *SMALL SPOILER ALERT KLAXON :)* move on from one guy to another so quickly in the story. I’m not quite sure I felt she should’ve gone with A Certain Love Interest after… though I did warm to him a little bit more later on! *SPOILER OVER :)*

The plot was full of clever twists, and was completely unpredictable. I was aiming to read just half of it, at least: I started it on New Year’s Eve and wanted to finish one more book before 2014, but didn’t think I would. Well, I did, purely because I simply couldn’t put Bombmaker down! I ended up devouring the book in two hours… it was so clever, and thrilling, and full of mystery. The setting was… pretty scary. This vision of a near-future England is terrifyingly possible, Claire’s writing brought it to life so vividly and imaginatively. It’ll keep you awake at night wondering about it, and you’ll be eager for more at the end!

Overall, Bombmaker was a brilliant book to end 2013 with… I absolutely loved it. It was a pacy, tense thriller driven by a great protagonist. Just… addictive! Highly recommended to anybody looking for an original and unique dystopia, that’s set to be a big hit. I’m crossing all my finger for a sequel, or at least a new book from Claire McFall soon… I love her writing so much! (:

I received a copy of BOMBMAKER from the publisher, in exchange for a review. In no way at all did this affect my thoughts.