Uh oh. I have a big book haul this week D: When shopping, I bought… nine books. Then my dad had a Big Bookish Clear-out, in which he sorted out a lot of books to boot-fair, etc. He gave me a lot too, and now I literally have no more room in my amazing TBR Wardrobe… I need a readathon soon to clear some room in there! (And there is talk with Debbie about this. We crazily thought about a 24 hour one on twitter…) Anyway, what I *think* is all of them! 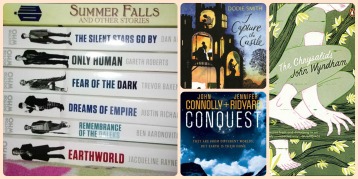 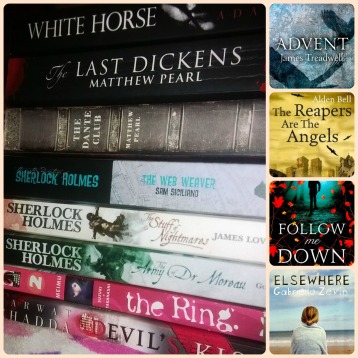 I Capture the Castle by Dodie Smith: I saw a picture of this cover tweeted out by somebody that I can’t remember a while ago. I had the cover in my head for ages, because this edition is so gorgeous! The story seems really interesting and unique. I spotted it in a local Waterstones earlier this week. I didn’t realised it was such s big book, though!

ALL THE DOCTOR WHO BOOKS ;D (Summer Falls collection, plus the 11 doctors series by authors including Ben Aaranovitch): Summer Falls was found in an awesome local comic shop. It has the Melody Malone story, which featured a bit in the episode with 11, Amy Pond and the weeping angels, if I’m remembering right! I really wanted to read it and had no idea it was part of a cut three-novella collection. Excited for that! Also, The Works has six of the Eleven Doctors novels in a 3 for £5 sale. I couldn’t not buy them…

ADVENT by James Treadwell: I’ve heard a lot of bad reviews, but I’ve also heard many good reviews. I’ve read some extracts and the writing is very beautiful! A large reason I’m looking forward to this is because the hardback edition is so pretty… I think this was sent to dad when hit first came out, and it’s got a pretty set of quote bookmarks too! (:

Various Sherlock Holmes Novels by various authors: I’ve been in a Sherlock mood, because SHERLOCK SERIES THREE! (off task note: Wasn’t it awesome and heart-breaking and heart-warming and funny and scary and action packed and AWESOME? June did a brilliant thing on her blog about it.) These obviously aren’t about the Benedict Cumberbatch Sherlock, but there are so many spin offs of the original by lots of authors. I’m kind of collecting them…

I would fangirl about more but I’d be typing for hours D: I’ll stop there! Have you read any of these, and what were they like? Leave a comment! (: