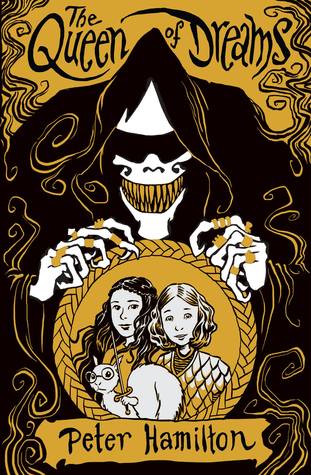 Goodreads Synopsis: Taggie and Jemima are summer holidaying on their dad’s farm, when they see a white squirrel wearing glasses . . . and soon after their father is captured and trapped in a faerie world that’s fallen to Darkness.

But why would anybody want to kidnap boring old Dad, especially the dreaded King of Night? Could it be that their family isn’t quite as ordinary as they believed?

My Review: I received The Queen of Dreams as a surprise in late 2013, and the cover was so gorgeous- I was excited to start it. I think it’s going to be a modern classic for children- ‘The new Alice in Wonderland’ is a fitting way to put it!

The Queen of Dreams follows Taggie and Jemima- two girls about to stay with their dad, currently divorced from their mum, on a holiday. Strange things surround their dad’s cottage… and within hours they’ve seen a squirrel wearing glasses leap down a well, then their dad is kidnapped, by terrifying creatures. I thought the squirrel thing was a bit too Alice in Wonderland at first, and was a little scared this book wouldn’t be very original. But, it really was! I enjoyed it a lot.

The fantastical world Peter Hamilton has created is vivid and beautiful. There are hidden realms, lost heirs to the throne, fairies flying in the sky, and a strangely loveable talking squirrel. It was so fun to get lost in the story, and at the last page I really wanted more! The book has a magical, personal feeling about it, because it was written for Peter’s children and two of the characters take his kids’ names. I found that really sweet!

Peter’s writing is descriptive and rich, and he’s created some really great characters. The king of night and the creepy people who begin to follow Taggie and Jemima are truly terrifying, and the main girls themselves are really fun to read about. There are themes of divorce and family in the book too, that I loved, and there’s a clever twist at the end of the book that left me aching for answers about the parents!

I loved the characters Taggie and Jemima, but at some points, I couldn’t really connect with them. That was one of a few parts of the book that I didn’t like! Also, events moved very quickly, and at a few points I struggled to keep up a little. I hope the pace slows down a bit in book two, so I can appreciate the writing better. Okay, The Queen of Dreams is a fantasy novel, but some parts I did find a little out of place, like a certain trip back in time to a well known place I can’t say anymore about… (:

Overall, The Queen of Dreams is a rich, imaginative and engrossing story. This is Peter’s first book for children, and I definitely enjoyed it. ‘m looking forward to hunting down Hamilton’s adult Sci-Fi novels, now, and the sequel to this! The Queen of Dreams is a mesmerizing story- a bit random in places, and sometimes very fast-moving, to me. However, I think a lot of children and adults alike are going to love it. I’m glad I got the chance to read it, as it’s definitely going to become a modern classic.

I received a copy of The Queen of Dreams from the publisher, in exchange for a review. In no way at all did this affect my thoughts.

4 thoughts on “Book Review: The Queen of Dreams by Peter Hamilton”