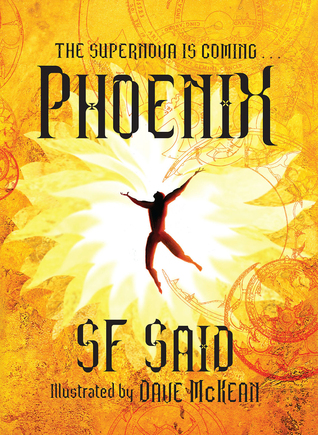 Goodreads Synopsis: THE SUPERNOVA IS COMING . . . ONE BOY ALONE CAN SAVE THE GALAXY!

Lucky thinks he’s an ordinary Human boy. But one night, he dreams that the stars are singing – and wakes to find an uncontrollable power rising inside him.

Now he’s on the run, racing through space, searching for answers. In a galaxy at war, where Humans and Aliens are deadly enemies, the only people who can help him are an Alien starship crew – and an Alien warrior girl, with neon needles in her hair.

Together, they must find a way to save the galaxy. For Lucky is not the only one in danger. His destiny and the fate of the universe are connected in the most explosive way . . .

My Review: This book kept catching my eye in bookstores, and I was approved for it on Netgalley. I kept putting it off because it was on my kindle and I prefer physical copies! I wanted to buy this to read on paper but in the end, curiosity got the better of me and I started it on my kindle, even though the illustrations have a better effect in physical copies. Even though it probably wasn’t the best reading experience, on a kindle, I feel in love with this story. I’m definitely going to be buying it and re-reading it soon!

Phoenix is about a boy called Lucky, who’s living in a universe torn apart by war. When he almost burns his room down in his sleep, a chain of events starts, pulling him into the conflict between the humans and the Axxa. The plot unfolds really well, and there were some genius twists that kept me guessing at the ending. There’s no way I could have ever predicted the last chapters. They were heartbreaking, yet hopeful, and so beautiful.

The book was full of some breath-taking world building- It was so vivid and realistic, I felt like if I looked out of my window I’d see the starships flying across the skies and the feel the stars singing. It was amazing, how powerful the world was! The plot was action packed and adventurous, yet despite all of the fantastical happenings, the story can be applied to real life. It deals with the effects of war, and unlikely friendships, and I really loved how that’s relatable to loads of situations here in real life. The writing, as well as the illustrations, bring the story to life beautifully. It was so descriptive, but not over-the-top, and generated a lot of powerful imagery. SF Said is really talented at weaving tension into a story, and he made me really feel for the characters.

Lucky is unforgettable. At first, over the first tenth of the book, I was a little unsure of him, because he didn’t seem to be that brave. Though, I think that may have been intended; because Lucky’s development over the story is amazing. His power, though it’s a burden to him, sounds pretty cool! (: Another character that I fell in love with, was Bixa. She’s an Axxa, as part of the starship crew that Lucky joins. She’s really unique and loveable- pretty awesomely kick-butt, too! Her friendship with Lucky was so… CUTE! I loved them, though of course all of the other members of the Axxa crew have a special place in my heart now… (:

Overall, Phoenix is a really amazing novel. I’m so glad I finally thought I’d request and read it. (I blame M at We Sat Down for this new bookish obsession!!) The plot was superbly written, and I immersed myself in the world so easily. I really, really didn’t want to leave it at the end! The characters were all flawless; each has such detailed backgrounds and personalities- I felt I knew them. I did really want to talk about all of McKean’s drawings for the book here, too: But on a kindle they really didn’t look as amazing as they do on paper. Phoenix is on my to-buy list for when I next visit a bookshop though, so I can read it in physical form and experience the illustrations better- they are breathtaking! Anyway- HIGHLY recommended for any sci-fi fans, fantasy fans, etc., out there- and also anybody who wants a new favourite book (:

I received a copy of Phoenix from the publisher via Netgalley, in exchange for a review. In no way at all did this affect my thoughts.