Today’s Steampunk book isn’t entirely steampunk; it’s more of a fantasy novel, though I really wanted to include it in this fortnight, because look at that pretty steampunk-y cover! And, mechanical birds! (Easily one of the coolest bits of the series) The author, Stefan Bachmann, will be on the blog tomorrow, with a guest post, too- which I am so excited for! ;D This is the sequel to The Peculiar- so if you want to pick up this book, make sure to check out that one, first! 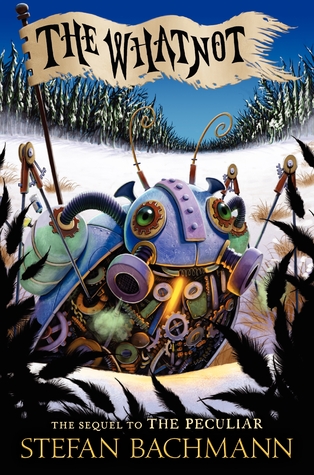 Pikey Thomas doesn’t know how or why he can see the changeling girl. But there she is. Not in the cold, muddy London neighborhood where Pikey lives. Instead, she’s walking through the trees and snow of the enchanted Old Country or, later, racing through an opulent hall. She’s pale and small, and she has branches growing out of her head. Her name is Henrietta Kettle.
Pikey’s vision, it turns out, is worth something.
Worth something to Hettie’s brother—a brave adventurer named Bartholomew Kettle. Worth something to the nobleman who protects him. And Pikey is not above bartering—Pikey will do almost anything to escape his past; he’ll do almost anything for a life worth living.
The faeries—save for a mysterious sylph and a mischievous cobble faery or two— have been chased out of London. They’ve all gone north. The army is heading north, too. So Pikey and Bartholomew follow, collecting information, piecing together clues, searching for the doorway that will lead them to Hettie.
The Whatnot is the enthralling, surprising, and unforgettable companion to Stefan Bachmann’s internationally bestselling debut novel The Peculiar.
My Review: I was so excited to start this! I was sent a copy of Stefan’s debut, The Peculiar, about this time last year by Harper Collins. The book completely blew me away; I was so absorbed in the fantastical vision of England, which was invaded by Faeries. I’ve been waiting since the start of the year to read the sequel, because I really wanted more of the world, and The Peculiar was left on such a cliffhanger- I needed to know what happened to Hettie… I haven’t been able to get around to the sequel since I was accepted for it on Netgalley in September ): But, I’m so glad I’ve finally read it now- it was definitely worth the wait- I read all of it in two sittings!
I was slightly confused, as the story began. There’s a new central character to the story- Pikey. He’s a pretty mysterious character- we don’t know everything about him, even by the end of the book, though he’s still really likeable. He’s similar to Barthy and Hettie, the Peculiar siblings (half human, half faerie!), because he’s hated by so many people. As I started, I wasn’t sure if I was reading right- where were the old main narrators, Barthy and Hettie? Then, the scenes began to switch between Pikey’s adventure, and Hettie’s. The two people are linked, because Hettie found his eye, and keeps it with her- and every now and then, he gets visions of her, from his lost eye. I loved that concept! It was really clever, and made the plot really interesting. When Barthy meets Pikey, they immediately go searching for Hettie- who’s been kidnapped, and now owned by a new character, who calls her The Whatnot. I really enjoyed reading about them. There were some great twists to the story, that kept me hooked and kept the characters  in constant danger.
Hettie is such a loveable character. I was already really attached to her in the Peculiar, and she was even more loveable in this installment! She seemed a lot braver and adventurous in this book, and her adventure definitely was the most fun to read about. Barthy (or Bartholomew)  seemed very… I’m not sure how to put it! I could connect with him really well in the Peculiar, but not so much in the Whatnot, at first. He seemed to me as a little distant and less likeable at first, though I grew to love him more again over his quest to find Hettie. The ending for both of these characters I can’t really talk about- I really don’t want to spoil it! But I’ll say that it will make tears spring to your eyes. Pikey also has a really great ending. I loved Pikey! There needs to be more of story to him- a spin-off novella, maybe, Stefan? Please? ;D
Stefan’s writing is absolutely beautiful. I fell in love with it in his debut- and it was especially brilliant, because The Peculiar was Stefan’s debut, that was published before he was nineteen. In the sequel, his writing was equally amazing. The descriptions were so vivid and realistic, I felt I was there- in this unique, original vision of a faerie infested England! Too often people say that an author’s second book, or sequel to a series, will be the hardest to write- I’m not sure about Stefan’s experience writing The Whatnot, but it was just as amazing as his first book, and it definitely didn’t let me down!
Overall, I was so captured by The Whatnot. The plot, as I hoped, was layered and unpredictable, and I found myself completely addicted to the story. The setting is so rich with imagination. I really love this world, but the way this book ended, I’m guessing that’s the end of it…. please no! More, Mr Bachmann! I need MORE of Hettie, Barthy and Pikey’s stories! ;D I definitely need to re-read the two books again sometime- and I’m sure I’ll be recommending these to anybody looking for an unforgettable fantasy, or a just a breath-taking read. Hettie, Barthy and Pikey are all completely unforgettable characters. I love them to bits! A highly recommended steampunk / dark fantasy adventure for anybody.
My Rating:

I received a copy of The Whatnot from the publisher via Netgalley, in exchange for a review. In no way at all did this affect my thoughts.

1 thought on “Spotlight on Steampunk: The Whatnot”