YAY!!! 😀 I’m so excited to share Stefan Bachmann’s guest post with you today! Stefan is an awesome author, who wrote The Peculiar and The Whatnot. I reviewed The Whatnot yesterday on my blog– 5/5, obviously- I loved it! Stefan really kindly agreed to write a guest post for my Spotlight on Steampunk event- I asked him if he would like to, as his book’s themes fall into the Steampunk genre as well as fantasy. So… *attemptstoholdinfangirlingandfailsmiserably*  here’s Stefan Bachmann talking about three steampunk-y influences on his writing!! 😀

So, Georgia was awesome and asked me to do a guest-post about steampunk, and I thought long and hard about it and realized I’m not any sort of expert on the subject. To which you say, “Um, Stefan, don’t write steampunk books then,” but you see, I felt like I *had* to. The Peculiar and The Whatnot take place in an alternate history that’s sort of a composite of old English faery tales and their creepy denizens and Dickensian England, and when I wrote the first one I felt like it needed to have steampunk in it. I didn’t know why. So for this post I decided to take a look back and try to figure it out, and I came up with three reasons:

Have you seen this movie? If you haven’t, you mussst. Disney has been awesome about including steampunk elements in its movies (Atlantis and Treasure Planet for instance) but this movie is the one that really set me off on steampunk, I think.

I was raised in Switzerland, and my Swiss grandparents had a VHS tape of the movie and they plopped me down to watch it when I was maybe four, and I did because four-year-olds aren’t particularly picky. I remember it being terribly sad and tragic, and I may have cried. BUT ANYWAY. It’s about a world of mice who live in a sort of parallel Mouse-London below the real London and have their own parallel mouse Queen Victoria, and an evil rat lord, and large dogs and tiny bits. It’s very atmospheric, very gloomy in a way, and it also has automatons and a sort of pedal-driven airship and creepy wind-up toys. I didn’t realize this for the longest time, but I’m pretty sure watching this movie was what made steampunk appealing to me as a kid and made me want to pick up steampunk books afterward, and probably informed the atmosphere and the Victorian elements of The Peculiar.

About a month before I started writing the first book I got three steampunk sculptures from my sister as a Christmas present. My sister is friends with many artsy people and one of them is Purplecat who makes all sorts of marvelous things. Here are the one’s I got:

This is the original clockwork bird on the cover, the way I imagined it while writing:

This snail has a brief cameo on the counter-top of Mr. Xerxes Yardley Zerubabbel, secretive mechanicalchemist of London:

This mouse was not used in either of the books, but it really should have been, because look at its derpy little hands. 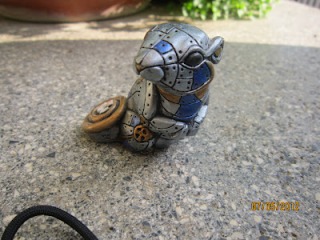 Reason 3 – Steampunk is awesome, and the story needed it

The story takes place in an England that’s populated by both Victorians and faeries, and they don’t get along. At all. The English keep the faeries as second-class citizens, force the goblins to work in factories, put flame faeries in streetlamps, and use elementals to power machinery; the whole steampunk works as a sort of antidote to the wild magic of the faeries, put in place by the English government wants to keep the faeries in check. I think atmosphere can be built really well through contrast, and I thought it would be interesting on so many levels to put these two polar opposites together and see what came from it.

That’s really what set off the idea for the book. I had a ton of fun building the world and playing the magic and the steampunk off each other, and finding ways to make them both integral to the plot. For instance, the bird on the cover looks cool (to me. I think) but it’s also vital to everything, as the villain uses it as a messenger bird to send slips of paper to his henchmen all over the country. Wen one of the two main characters intercepts it, it sets the entire plot in motion.

Thank YOU, Stefan!! 😀 I’m so glad you could help out for my Steampunk event! I really loved the guest post so I’m pretty sure everyone else will. The inspirations are so cool! (Treasure Planet is SUCH a cool movie, but I haven’t watched the Great Mouse Detective, so I’m guessing I NEED to now…:D)

If you haven’t yet read Stefan’s books, I really recommend you do. They’re brilliant, and you can get a taste of his writing at the Cabinet of Curiosities website– where he and three other equally talented writers post fantastical and often creepy short stories (an anthology will be out soon, too! *fangirlyscream*)!

1 thought on “Spotlight on Steampunk: A Guest Post from Stefan Bachmann!”