By Marcus Sedgwick, published by Orion. 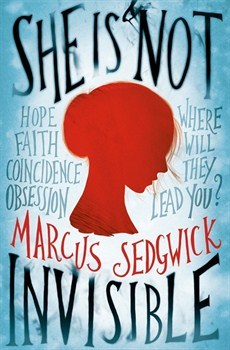 Goodreads Synopsis: Laureth Peak’s father is a writer. For years he’s been trying, and failing, to write a novel about coincidence. His wife thinks he’s obsessed, Laureth thinks he’s on the verge of a breakdown.He’s supposed to be doing research in Austria, so when his notebook shows up in New York, Laureth knows something is wrong.

On impulse she steals her mother’s credit card and heads for the States, taking her strange little brother Benjamin with her. Reunited with the notebook, they begin to follow clues inside, trying to find their wayward father. Ahead lie challenges and threats, all of which are that much tougher for Laureth than they would be for any other 16-year old.

Because Laureth Peak is blind.

The idea for this story is so original! It’s one of those rare ideas that you come across, that’s never been done before. It doesn’t seem to have taken any inspiration from anything, making it so unique in a world where a lot of books are following genre trends at the moment. Laureth’s dad has disappeared, and Laureth has run away to New York, taking her little brother with her for guidance, as her mum is away and doesn’t believe he’s in danger… and Laureth is blind. I don’t think I’ve ever read a story where a blind character has taken the lead role before, aside from in the Maximum Ride series by James Patterson. One of the reasons that I loved this story is because of the main character, as I admired her bravery to set out into an unknown world!

The main theme of the book was Coincidence, which was a very individual theme. I’ve never read a book based around something like Coincidence before, and wasn’t sure how it would go. It was so clever! One of the things this book had me wondering about after I’d finished was whether coincidences were real… and whether the stuff in Laureth’s dad’s notebook could come true… *shiver*

One word to describe the plot? Misleading. There were loads of twists and turns to this book that I was not expecting! The story was complex, but not confusing, and a really enjoyable read. I was on the edge of my seat, totally hooked on the story as Laureth and Benjamin were searching their way around New York, with a notebook full of terrifying notes on a cult with ties to mysterious coincidences. I was so scared for the characters, and very interested about the places they were led to- Edgar Allan Poe’s house, for one! I could also visualise them really well in New York, as I’ve been there before, and so it was really easy for me to slip into their shoes. Even if you haven’t been there, Sedgwick’s writing will transport you into their world, and make you feel like you don’t want to come out.

Laureth, as I’ve already said, was a really brave character. I know that Marcus spent a lot of time with blind peoplee, so he could get experiences correct. I’m pretty sure he got it spot on. It was so interesting to be in Laureth’s shoes, to imagine what it was like to travel halfway across the world to find a father when you’re only relying on four senses. Not only was she brave, but she was also very realistic. Benjamin was, too; her little brother who she took with her! He was so sweet and obeying, and I just loved him to bits. Both of them were so great! (Also, there’s a pretty funny background to Laureth’s name- Marcus, is that how you came up with it??).

Ah, I’ve ranted on too much about this! So I’ll wrap up now, but I could go on forever about this book… Overall, it was an amazing read, and very unique, too. A thrilling search for a lost father, who’s obsessed with an idea for a story? It was just so great! Laureth was a brilliant leading character who anyone will connect to. She Is Not Invisible is written so well, and I definitely think this book’s going to be big. Sedgwick fans, grab a copy now! Or if you’re someone looking for a read that’ll blow you away, you go grab a copy now, too! (: (Bonus: the cover is really pretty) It’s hard to compare this to anything… I can’t recommend this enough.

I received a copy of She Is Not Invisible from the publisher, in exchange for a review. In no way at all did this affect my thoughts.

6 thoughts on “She Is Not Invisible”