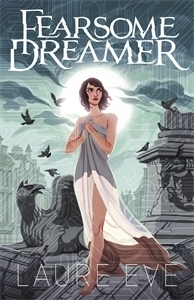 Goodreads Synopsis: There is a world where gods you’ve never heard of have wound themselves into hearts, and choice has led its history down a different path.
This is a world where France made a small, downtrodden island called England part of its vast and bloated empire.
There are people here who can cross a thousand miles with their minds. There are rarer people still who can move between continents in the blink of an eye.
These people are dangerous.
And wanted. Desperately wanted.
Apprentice hedgewitch Vela Rue knows that she is destined for more. She knows being whisked off from a dull country life to a city full of mystery and intrigue is meant to be. She knows she has something her government wants, a talent so rare and precious and new that they will do anything to train her in it. But she doesn’t know that she is being lied to. She doesn’t know that the man teaching her about her talent is becoming obsessed by her, and considered by some to be the most dangerous man alive…

My Review: Fearsome Dreamer is one of those books where you finish reading it, then stare at for a while thinking Why didn’t I think of that idea? I SO wish I’d written that. Fearsome Dreamer’s a rich mixture of fantasy and sci-fi, with a pinch of romance. Whatever genre you prefer, I’m sure you’d love this! I’ve left a huge gap between reading and reviewing this, so I’m not entirely sure if I can explain how awesome this was…

The book is told from different perspectives in every chapter; alternating between characters in World- a virtual reality many people have migrated to- and Angle Tar, a beautiful, fantastical place in which our main character, Vela Rue, lives. The story kicked off with a great insight into Rue’s life and occupation. I really loved how I was plunged straight into the story, though it meant I was a little too confused at some parts. However, I adjusted to this unique and imaginative world, and got hooked after less than a quarter of the story! The plot was beautiful, and the ending left a cliffhanger that’s gotten me so excited for Fearsome Dreamer‘s sequel, an extract of which is in the back of the book-yay! I’m really excited to read another installment of this original piece.

Rue was a really interesting character. She’s a hedgewitch, and I found her profession really interesting. Her Talent was so cool! I’m not entirely sure why, but I kept comparing her to Paige from the Bone Season by Samantha Shannon. I think it was because Rue was this amazing, almost super-natural person, who’d been taken away to others like her by overpowering forces. I loved her as a protagonist! Our male main character was White, a teenager boy who changes a lot in the book. He was probably the character who developed the most, and I really loved him. In fact, I may have enjoyed reading about him a tiny bit more than Rue!

I’m probably going to need to re-read this book at some point. It was brilliant, but I think I could have enjoyed it even more for one reason: I was reading this in-between lessons and on the tram to/from school, as I was reading this during schooldays. I really think I should’ve waited until the weekend! As I was only reading small snippets at a time, I don’t think I got to enjoy the story fully enough. I’d have preferred to devour it in a couple of sittings. This isn’t the author’s fault, obviously. I’m definitely going to have another read of this when I have the chance!

Overall, Fearsome Dreamer was a pacy, thrilling read. Laure’s YA novel is just amazing for a debut- you’d think she’d written million of books before this, thanks to her beautiful writing style and imaginative worlds! The setting(s) were really great, and there was also a little bit of romance growing between the two main characters- I can’t wait to see how that evolves in the sequel! One word to describe this book? Original. It’s hard to place this in one genre- it’s a perfect blend of every type of book I love! Recommended to fans of fantasy, sci-fi, action, romance… the list goes on.

I received a copy of Fearsome Dreamer from the publisher, in exchange for a review. In no way at all did this affect my thoughts.