By Darren Shan, published by Simon and Schuster 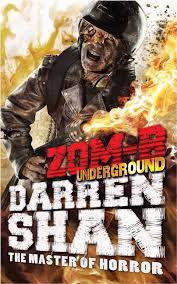 Where can you turn when you’re trapped in a living nightmare?

B Smith is back, but this time as a zombie! Due to the events of the last book, B was turned into one of the living dead. Now she has woken up in a lab, as a zombie with a human consciousness  She can talk, and act like a human, but there is one problem- she has no heart! The gaping hole where it used to be is the sign that she is a brain-craving zombie. Soon she finds out that there are more like her in this lab, but what are they doing with them? And what happens when there is a massive attack on the lab?

I couldn’t wait to read this book; I had enjoyed the first one so much. There’s blood, gore, and violence: everything I love in a good horror story! It’s a brilliant zombie series- in the class of Charlie Higsons’ ‘The Enemy’ series.This book was a lot different to any zombie stories I’ve read before though- Darren Shan had the unique idea of giving some zombies live B Smith the gift (Or curse!) of human emotions and abilities despite being dead. It made the story really unique!

There was so much violence, gore, horror and emotion packed into the pages, and Darren Shan has painted such realistic visions of a zombie apocalypse. Some parts, (especially the clown part) frightened the life out of me, other parts made me laugh, and others cry. It’s a really great read for anybody with a love for gore and horror. And although I can’t wait for the next installment, I’m a little worried that the next books may get dragged out a little (there are going to be twelve books in total for this series!). However, I’m confident Darren Shan will have lots of exciting plot twists up his sleeve- I mean, didn’t he write a bestselling vampire series (Cirque Du Freak) that was twelve books long?

Look out for the next book, Zom-B: City, coming soon!