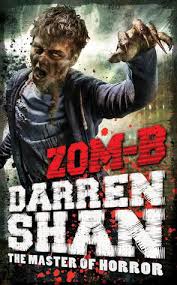 The master of Horror is back, ditching the vampires for Zombies! (Or should I say Zom-B’s?)

B Smith is a slightly naughty, misbehaving teenager. B’s dad is a racist thug who takes pleasure in hitting his wife. But B Smith has never gone to anybody about it. B has enough to deal with; including nightmares of killer babies.

One day, the news broadcasts a scene from a small village in Ireland where people have turned into blood lusting zombies, craving for brains and massacring their friends and families. Convinced it’s some joke, B dismisses it, and carries on with life. But whilst watching a football match in the school Gym, a zombie comes in and starts cracking somebody’s head open and eating their braisn! Soon half of the Gym is infected and a killing game has begun. Desperate to get out, B Smith is the leader of the pack as they travel around the school, striving to find a way out. But can they all survive, or will some be devoured by the evil zombie-turned school students?

Wow. Just Wow. I’ve loved Darren Shan’s books for a long time; i read the first Cirque Du Freak book at what must have been around the age of nine! Since then I’ve loved the gritty Horror of Darren’s books and met him once at a signing. Now, he ditched the vampires for zombies! This book was purely awesome, but with a moral hidden between the lines, about Racism. I won’t spoil the story, but because of B’s Dad’s racist actions, B ends up doing something incredibly terrible… that really made an impact on me as the reader.

The whole book, even though it wasn’t until kind of near the end when the zombies actually invaded the school, was fast-paced and packed with suspense. And, of course, being Darren Shan, the descriptions are bloody, and brilliant!

The man pushes back his hood with his free hand. His skin is disfigured, some strips of flesh peeling from his cheek. Straggly grey hair. Pale yellow eyes. He’s missing some teeth and those still intact are black and cracked. He points at me and i note absentmindedly that he doesn’t have any fingernails, just filthy, bloodstained flaps of skin.

What an awesome Gory description!! This is what i love about Darren Shan… I can’t wait for the next book in the series- ZOM-B UNDERGROUND!