By Paula Rawsthorne, published by Usborne 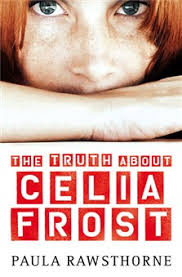 A gripping manhunt, a dangerous deceit, what is the truth about Celia Frost?

Everybody thinks Celia Frost is a freak. She can’t do anything, because she has a rare medical condition which means the slightest cut could make her bleed to death. She is an outcast; alone in school and when she isn’t in school she’s at home, where her mother says she has no worries about her getting harmed. But, when Celia is the victim of a knife attack, she doesn’t bleed to death. The bleeding just stops and the cut begins to heal. Was it a lucky chance? Celia doesn’t know. But as soon as her mother finds out they’re both on the run, and Celia has no idea why! With the help of  a new friend, Celia gains freedom and begins to enjoy her new life, never at home often because she thinks her mother is a freak, and only said about the medical condition because she’s crazy.

But soon, Celia realizes why they were running away, and the reason changes her whole life… forever.

Un-put-down-able. That’s how i describe this book. It’s a fast paced thriller, and the Author has such talent. I was amazed by it, the ending is brilliant… how it all turns out to relate to a world crisis… ingenious! It contains lots of twists and turns, friendship and shocks and I love how Paula Rawsthorne made this book so believable, so real. It’s an awesome book i would recommend to any teen, i love it!