By Jana Oliver, published by  Macmillan 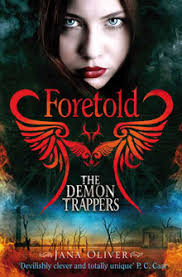 Join Riley, Beck, and all of the other well known, well loved characters of Jana Olivers’ hit teen series for the final book!

Denver Beck finally admits that yes, he is in love with Riley Blackthorne, and Riley admits she is in love with him. As they come closer together, this amazing last book throws everything it has at the two lovers, a test of strength and love.

Firstly, Becks horrifying past closes in on him. While he and Riley are in Becks’ old town because his mother is slowly dying, a mystery of Becks’ past opens up to Riley, and results in attempted brutal murder. Surprisingly, there weren’t many demons in this part of the book!

Next, Ori begins to summon Riley every night so she can help him do his evil deeds. But soon, it all becomes clear. Ori had not actually been using her as his second, he had been preparing her for the final showdown, which includes heartbreak, loss, and Demons. lots of demons. and a Fallen Angel determined to rule hell whatever comes in his way…

I seriously enjoyed the last three book in the series. They’re everything teens books should be, romance, mystery, magic and demonic beings. This last book? My favorite of the series. It’s really unpredictable and I literally couldn’t put it down, each chapter ending on a cliffhanger leaving you needing to read the next chapter. I love how all the characters have grown throughout the series, and become the amazing characters who make this book so awesome. This book had me hooked, I couldn’t stop reading! It has the most epic ending, not how I expected; it was better than I expected. I found myself reaching the last page and wanting to read on about what happens in the future for the Demon Trappers guild!

All in all, this book shouldn’t be missed. Keep writing, Jana Oliver!