[I have a spoiler-y thing to say about CATALYST but I’ve put the spoiler BELOW my review – under the rating – so you can read this review if you haven’t read the book yet! 🙂 ] 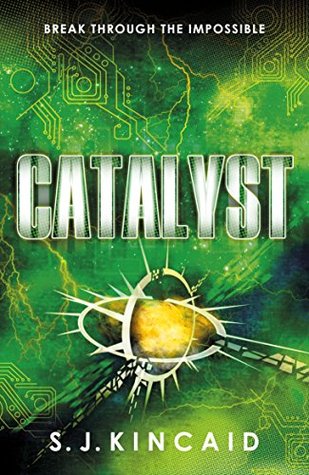 Goodreads Synopsis:  Tom Raines is about to break through the impossible…

Tom Raines and his friends return to the Pentagonal Spire for a new year, eager to continue their training for the elite Intrasolar Forces. But they soon discover troubling changes. Strict new regulations, suspicious agents in positions of power and the revelation that the Spire is under military control. The trainees are now cadets.

What begins as an irritating adjustment soon reveals a dangerous shift in reality. Those in control have a ruthless agenda. And when the military academy begins welcoming suspicious new cadets, they reveal a plan with horrifying worldwide ramifications. Tom is desperate to stop it, and it seems he is not alone. But when the enemy comes for Tom, how much can he endure in the battle to save himself?

My Review: When I received this in the post I was ridiculously excited, because I’ve been a fan of S J Kincaid since I read INSIGNIA, in 2012! I got a little nostalgic feeling, too, because INSIGNIA was the first ever book I reviewed for Hot Key Books. I was very eager to start reading it, as I’ve been waiting for the last book for so long – but also it was pretty sad to realise it was time to let Tom, Wyatt, Vik, Yuri and Medusa go…

It took me a few pages to regain my memory of what had happened at the end of VORTEX, but as soon as I had, I was completely absorbed in Tom’s world. I’d forgotten how much I’d loved it. From Tom’s realistic narration, to the eerily believable future world, to the hilarious banter between Tom’s friends, the supporting characters.

CATALYST was, needless to say, action packed. There was never a dull moment – I think I’ve said that before about the previous books, but it’s true – and CATALYST is without doubt the most intense, eventful novel of the trilogy. It was hard to put down! The events of the book played out really cleverly, and the twists in the story were utterly unpredictable. I did get a bit confused at a few points, as the pace was really fast and there was a lot going on, but it was overall such an enthralling read.

Overall, CATALYST was such a great read, and a compelling end to a memorable trilogy. I really recommend it, as it was a satisfying end to Tom’s story – and also if you haven’t picked up the trilogy at all… whhhyyy not? I wouldn’t have ended the plot on a different point: S J Kincaid did such a good job at tying up all of the loose ends, and creating an unforgettable finale to what’s most definitely the most inventive Sci-Fi tale I’ve ever read.

I received a copy of Catalyst from the publisher, in exchange for a review. In no way at all did this affect my thoughts.

There’s a huge plot twist within the first third of the book that literally had me on the edge of my seat! The meteor was such a tense, thrilling part of the story. It was really well written, but if I could change one thing about CATALYST, I’d love to know the true after-effects of the crash, because it was left unmentioned for the much of the book, and I was really interested to see how the future world could have coped.