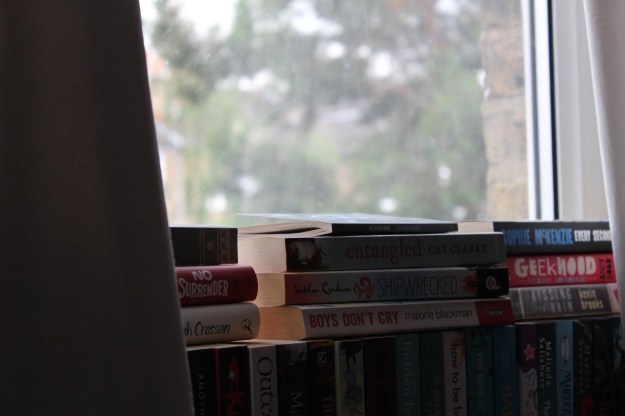 Unless you’re on Twitter and have seen my constant whining about exams, you might not know that I haven’t actually blogged in an incredibly long time. Aside from one or two reviews written on revision breaks, every blog post since about February was written and scheduled at the beginning of the year, so that I was able to keep this blog looking alive, whilst also being able to revise.

Comparatively, I haven’t had many exams this summer – I took ten, whilst some people take fifteen to twenty. I count myself lucky for that! However, that didn’t stop me from being a complete wreck over the last few months. The stress I’ve been experiencing over some exams is crazy – it’s not anyone’s fault, but the pressure to get an A* I subjects I’ve been doing well at over the years can be ridiculous. But anyway. Exams and all of the problems with them is a discussion for another day.

The stress, though! I wanted to try and continue hobbies like blogging and reading through exam season, because it’s what keeps me sane. But school became so exhausting, so quickly. Days started to become so much longer, because I would either be in school until incredibly late, or would come home and dive straight into more studying. Subjects fast became incredibly tiring… There are a few things I’ll miss about secondary school, but having maths pretty much all week is NOT one of them.
And in the run up to, and during the actual exam weeks, I’ve barely had the time to think properly, everything has happened so crazily (try being in at 7.00 to revise for your 9.00 English exam, then straight after the exam staying in school until 6 to revise geography, then coming in the next day to revise from 7.30 to prepare for said geography exam, which is 3 hours long later that day. Yeah I don’t know how I’m not dead either).

When I did have small snatches of spare time, I was way too tired to do anything vaguely productive, which really aggravated me because if I’m not doing something useful, I freak out. So three months of sleeping and tumblr-ing has led to me feeling really rubbish, basically.

I’ve read about three books in the space of two months. And two of those were for English Lit. I miss reading so much, and I miss blogging about reading.

I took my last exam last Friday, and now I have five weeks before I go back to school for a summer job (what am I doing!!!) so when I’m not asleep during this blissful break, I’ll be excitedly blogging and diving into books again! I can’t wait to make some cool stuff. I want to plan some awesome discussions and pretty graphics and talk about BOOKS AND STUFF. So watch this space.