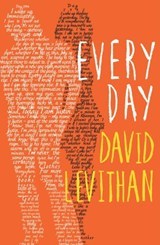 Goodreads Synopsis: Each morning, A wakes up in a different body. There’s never any warning about who it will be, but A is used to that. Never get too attached. Avoid being noticed. Do not interfere. And that’s fine – until A wakes up in the body of Justin and meets Justin’s girlfriend, Rhiannon. From that moment, the rules by which A has been living no longer apply.

My Review: Upon finishing Every Day, I was in… an emotional mess, to say the least. I know it’s a book I will go back to and read over and over again. In one word, it was beautiful. Levithan’s poetic writing style; his unforgettable characters; the original concept; the wild love story – It was all so beautifully written and captivating. Every Day is one of the best books I’ve read this year. Close contender for the best book I’ve read this year.

I’m not sure why I’d left this on the TBR pile for so many months, since reading the blurb when I bought it when it was first released had me really intrigued: Waking up in a different body every day, having to leave no trace of your true self anywhere, not being able to attach to anybody… The whole concept just sounded like a brilliant premise for a novel.

As I was starting, I got a bit worried I’d just get really confused – having to get used to a whole new character that protagonist A is inhabiting for every different chapter. However, David Levithan just made it work. I kept track of everybody and I was left thinking about all of the characters A inhabits just for a day, long after I put the book down.

A, the protagonist, has no gender, no ethnicity, no true body aside from each one A inhabits every day. A is just simply… A. Despite not being able to picture a face for the A, I found A to be one of the most memorable YA characters I’ve ever read about. A has such a memorable and complex personality that I instantly resonated with. On the other hand, Rhiannon is just an average teenage girl – but I fell in love with her character as much as I did with A, I think! She felt so three dimensional and I loved how she believed in A and went to huge lengths for him. They had such a great chemistry.

I can’t even write about the ending without spoiling it or crying so I’m just going to leave a gif here for David Levithan.

Overall, Every Day was evocative, emotional and beautifully written YA books I’ve ever read… I’m so glad I picked it up on a whim. I devoured the whole story in two sittings, but I really didn’t want to let it go at the end. I think I say that a lot in book reviews, but I really, really mean it – David Levithan had me completely caught up in the wild, devastating, but gorgeous love story he’s crafted, and I was much more attached to the protagonists by the ending than I thought I would be. Every Day really makes you think, about everything. About identity, living in other people’s shoes, and so much more. I know I’ll be rereading this over and over – if you haven’t already read Every Day, I really recommend it be the next book you pick up (:

I purchased a copy of Every Day at a bookstore.

4 thoughts on “Book Review: Every Day by David Levithan”