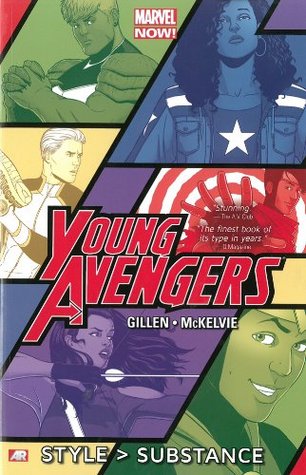 Goodreads Synopsis: Legacy isn’t a dirty word…but it’s an irrelevant one. It’s not important what our parents did. It matters what WE do. Someone has to save the world. You’re someone. Do the math. The critically acclaimed team of Kieron Gillen and Jamie McKelvie reinvent the teen super hero comic for the 21st century, uniting Wiccan, Hulkling and Kate “Hawkeye” Bishop with Kid Loki, Marvel Boy and Ms. America. No pressure, right? As a figure from Loki’s past emerges, Wiccan makes a horrible mistake that comes back to bite everyone on their communal posteriors. Fight scenes! Fake IDs! And plentiful feels! (aka “meaningful emotional character beats” for people who aren’t on tumblr.) Young Avengers is as NOW! as the air in your lungs, and twice as vital. Hyperbole is the BEST! THING! EVER!COLLECTING: Young Avengers 1-5, Marvel Now! Point One (Young Avengers story)

My Review: Dad bought me the first issue of this when it first came out, and I enjoyed that so much. But by the time I’d been able to get to a comic shop I’d already missed two or three issues 😦 I finally got around to ordering the first volume a couple of week ago, and as soon as it was in my hands I started reading. I finished it in one sitting. Then reread it all the next day. The AWESOMENESS. I can’t even describe it properly!

Young Avengers is everything I was hoping it would be: non-stop action, super awesome bad guys, a riveting storyline, and a group of brilliant and dynamic teenage superheroes. It had a very Marvel’s Runaways feel to it, and I think that’s a main reason why I loved it so much! The plot, in one word: addictive. It’s so hard to pull yourself away from the pages… Kieron Gillen is a genius writer and this comic just adds to the evidence.

All of the characters were really well developed. I felt like I knew each and every one of that. I loved Loki waaaay too much. And Miss America is a new favourite female protagonist. Also, I’m shipping Hulkling and Wiccan so much. Argh. They’re PERFECT :3 The young avengers make up one of the coolest teams I’ve ever seen, and I can’t wait to read more about them!

I don’t think I could love the artwork more than I already do. It’s so gorgeous, detailed and vibrant. Everything, right down to the layout… just works so well. I think I’ve found new favourite comic illustrators! There are some outstanding, really unique and cleverly drawn two-page spreads and ahhhh… *tries to think of how to describe it* *fails* It’s just too gorgeous! Click here for a preview of a spread on bleedingcool. Have you seen it? Yes. I know. TOO PRETTY. *flails*

Overall, Young Avengers Vol 1., Style > Substance was just stunning. You can tell it’s brilliant and modern and fun and awesome just from the way it references Feels and Tumblr in the synopsis. 😀 I’m about to order the next volumes to carry on reading; I’m desperate to read on! With Kieron Gillen working on it, could it be any less than brilliant? Nope. honestly, go buy a copy now. You will not regret it. It’s definitely in the top three best graphic novels I’ve read this year.

I purchased a copy of Young Avengers online.