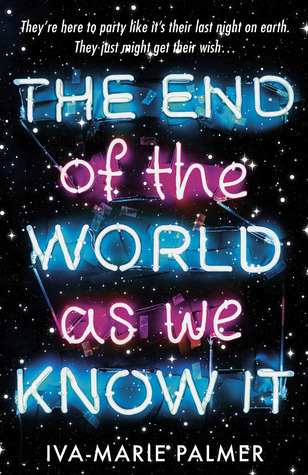 Goodreads Synopsis: They wanted to party like it was their last night on earth. They just might get their wish….

Meet the four most unlikely heroes ever:

When Teena locks Leo, Evan, and Sarabeth in the basement during her biggest party of the year, she doesn’t plan on getting trapped in the Loser Dungeon herself. She can barely imagine a night with these dweebs—let alone a lifetime. But when an alien invasion destroys their entire Midwestern suburb, it looks like these unlikely friends are the last people on earth. Now, it’s up to them to save the world…

My Review: The End of the World as we Know it is a book I’m pretty mixed on! It was a good read- I love funny books and I love books about aliens, and this did have both. I was excited to start it, but from a few pages in I wasn’t sure I was really going to get into it. I don’t think I fully did… The story was pretty hilarious but I just found it a bit… I don’t know… I just didn’t click with it entirely.

I think the main reason I didn’t enjoy it as much as I’d hoped was because of the characters. They’re all very well developed, and they’re classic stereotypical characters of sorts- the slightly geeky one, the goody-goody son of the local Vicar, the rebellious slacking teenage guy, the popular girl who has a bit of a bumpy history with one and hates all of the others. They meet properly by all getting locked in a basement as the apocalypse happens, which I found pretty funny. But it really started annoying me later on in the book, how they all seemed much more focused on their relationships than saving the planet. Okay, it’s meant to be a funny read… but I guess I was in a Sci-Fi mood and wanted more alien action and things!

The plot was really enjoyable. It shouldn’t really be taken too seriously- it’s an epic adventure across a post-alien-invasion town and the weapons that overcome the aliens are stupidly brilliant. I liked Iva-Marie’s writing. It really drew me into the story, even when a character was annoying me a bit! Some parts are a bit silly, but it was definitely a fun read, that made me giggle quite a bit.

Overall, The End of the World as we Know it wasn’t what I was expecting, but fun to follow anyway. The story is a mix of Sci-Fi horror and humour that I found really unique. I liked the development of the characters over the course of the story, but at points they did kind of annoy me… I’d recommend this to fans of contemporary comedies, definitely. I’m really mixed. There were multiple things I disliked but in all, it was a really enjoyable read.

I received a copy of The End of the World as we Know it from the publisher, in exchange for a review. In no way at all did this affect my thoughts.

2 thoughts on “Book Review: The End of the World as we Know it by Iva-Marie Palmer”