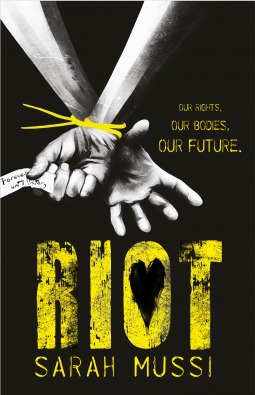 Goodreads Synopsis: It is 2018. England has been struggling under a recession that has shown no sign of abating. Years of cuts has devastated Britain: banks are going under, businesses closing, prices soaring, unemployment rising, prisons overflowing. The authorities cannot cope. And the population has maxed out.
The police are snowed under. Something has to give. Drastic measures need taking.
The solution: forced sterilisation of all school leavers without secure further education plans or guaranteed employment.
The country is aghast. Families are distraught, teenagers are in revolt, but the politicians are unshakeable: The population explosion must be curbed. No more free housing for single parents, no more child benefit, no more free school meals, no more children in need. Less means more.
But it is all so blatantly unfair – the Teen Haves will procreate, the Teen Havenots won’t. It’s time for the young to take to the streets. It’s time for them to RIOT: OUR RIGHT TO CHOOSE, OUR BODIES, OUR FUTURE.

My Review: RIOT was a really action-packed, fast paced book! I really enjoyed it, so I’m looking forward to hearing more from Sarah Mussi. The beginning of the book completely hooked me in- with a peaceful protest gone violent in the middle of the city. Instantly I was wondering why London had become a rioting hotspot, so I sped through the book, eager to know what happened next. RIOT is about a near-future, overpopulated England, where extreme methods are being used to ensure the youthful generation has as little children as possible. I was really interested in the themes, because I’ve been enjoying studying overpopulation and effects in school (biiiiit of a Geography nerd here…). I dived into this not actually knowing what it was about- a bit coincidental, actually!

I enjoyed the plot; I love thrillers and dystopians and anything similar, so it was a fitting read for me. RIOT is clever and original, with plenty of edge-of-your-seat scenes. It’s pretty political, too. Whilst I did really like it, there were a few aspects I disliked a bit, though. I know the book is meant to be fast paced, but at quite a few points, I felt it was moving a little too quickly. I had to reread a few parts!

Tia is a really great main protagonist, she’s very down-to-Earth and real. Tia is the main cause behind all of the protests against the government’s actions; online, she’s a Hacktivist called EVE, organising protest rallies with the anonymous ADAM. I think Tia developed a lot while the story progressed, though I really couldn’t get on with the supporting character, Cobain, for a lot of the time. I’m not completely a sure why, I just didn’t really click with him, until a lot later in the book, after a pretty breath-drawing plot twist…

Overall, RIOT was a great read…it’s perfect for fans of Sophie McKenzie’s Split Second. I think the book did move a bit fast, and there were a few parts I didn’t like, though I can’t elaborate on those much without spoiling! On the other hand, RIOT is packed with some really genius twists and turns. Tia’s awesome. The themes really intrigued (and slightly scared…) me… so I really liked it!

I received a copy of RIOT from the publisher via Netgalley, in exchange for a review. In no way at all did his affect my thoughts.