Today on the blog I have an author’s guest post; one of the writers contributing to the Daughters of Time anthology! It’s a really great book written by the History Girls (http://www.the-history-girls.blogspot.com). I’m currently reading it and enjoying it. I did want to read it in time to put a review up with this post… But I wasn’t able to 😦 Review should be up next week! Here’s Dianne Hofmeyr on why she chose her historical figure in the anthology:

Why I Chose Elizabeth Stuart 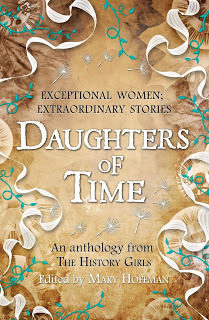 I grew up in a country without a king or queen, so the life of Elizabeth Stuart, daughter of a king, who was to become a queen herself, seemed like something out of a fairy tale.
I was fascinated by Elizabeth’s lack of pretence – that she refused to dress formally for her portrait for Frederick, and left her hair wild and untamed. For her wedding she adopted the same fresh approach and despite the custom of the time and her mother’s rigid adherence to formal dress, she wore her hair long and dishevelled down her back.
I like her playfulness and boldness – she was prepared to dress as a boy to be allowed access into her brother’s rooms when he was ill. And I like her determination. It was unusual for a young princess to marry someone she truly loved.
Elizabeth almost followed the true fairytale princess format story in that, after her marriage, she went to live in a beautiful castle in Heidelberg, where Frederick built her a monkey house, an aviary, a menagerie and an Italian Renaissance garden. I visited Heidelberg Castle some years ago and wandered around those same gardens without knowing that one day I would write the story of a young girl who lived there nearly four hundred years earlier.
-Dianne Hofmeyr

I hope you enjoyed the guest post! Daughters of Time is out this month from Templar Books; make sure to get a copy- it’s brilliant! (: