My first author interview of the year, and probably one of the most exciting ones I’ve ever gotten to do!

SF Said wrote Phoenix, most recently- a sci-fi epic about a boy searching for his missing father. I fell in love with it; it was beautifully written and really captivating. You can read my glowing (No pun intended- the book’s about stars!) review here!

First up, here’s a little about SF… (I felt arty! So this looks relatively cool!): 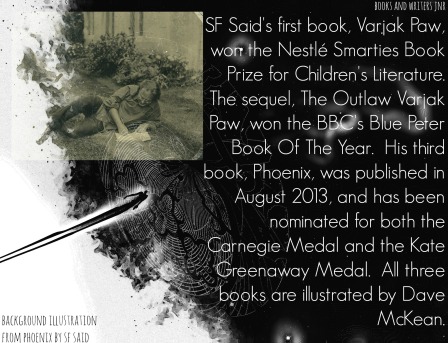 Onto the interview questions, in which writing, book themes and illustrations are covered… The images are all of Dave McKean’s beautiful artwork for the book, aside from the photo!

Where did the initial idea for Phoenix come from?

The initial idea was about a boy who goes on an epic quest to find his missing father.  That was all I had at the start.  I didn’t know who the boy was, or where the quest would take him – until I got the idea of setting the story on a starship.  This idea popped into my head one afternoon, and I immediately knew it meant we’d be crossing the galaxy, and there’d be aliens… and that’s when I got really excited about it!

The book took off from there.  But I have to admit, it changed a huge amount over the seven years it took to write it!

What was the hardest scene to write in Phoenix? (Don’t worry, no spoilers here- thanks, SF!:))

The beginning and end were both very hard.  But the thing I found hardest runs all the way through.  It’s what you might call the mythic background.

The aliens in Phoenix believe that all the mythological gods are really stars who come down from the sky.  They take different forms in different times, but they’re always the same immortal beings, returning again and again through history.  They call them the Twelve Astraeus.

Originally, I wrote lots of material about the Twelve Astraeus, to explain this background.  But it was impossible to find words powerful enough to describe them.  After all, gods and stars should be mysterious and awe-inspiring beyond words!

Then I came up with the idea of describing them through illustrations and song fragments.  I gave Dave McKean a list of the Twelve Astraeus, with their names and attributes in different mythologies (Greek, Roman, Norse, Egyptian,

Mesopotamian etc.)  The images he created have exactly the sense of mystery and awe that I wanted.

I also wrote song fragments to go with the pictures, which give you little hints about them.  So when readers encounter the Astraeus of Love, for example, they can work out for themselves that she’s been called Venus, Aphrodite, Ishtar, Astarte, and so on; and even if they don’t, they’ll just feel who she is, without being told.  I find that much more powerful and evocative than ordinary prose – but it took me a long time to work out the best way to do it!

Why did you decide to write a book set in Space- what that inspired by anything in particular?

I’ve always loved space stories.  The stars have always filled me with a sense of wonder.  I love the thought of other life; other worlds, out there in the universe…  and I know I’m not alone in these feelings.  Yet there aren’t many books set in space for younger readers, given how popular it is on TV and in films (Doctor Who, Star Wars, Star Trek…)  So because I wanted to read more space stories myself, I had to sit down and write my own!

I’m also very interested in space science and astronomy, and the incredible things that are being discovered all the time.  I love the idea of Dark Matter, for example.  It seems that most of the matter in the universe is ‘Dark Matter’; it’s usually invisible and undetectable, but it’s what holds everything together.  So I put this idea into the book, and Dave McKean made some beautiful images of it, partly based on fractals.

But it turns out that his illustrations are incredibly close to the reality!  Just last week, astronomers captured the very first image of the web of Dark Matter that holds the universe together – and it looks astonishingly like Dave’s pictures!

Are any of the characters based on real people?

The one that’s closest to reality is probably Mystica Grandax, the Startalker.  She is largely based on my grandma, who died during the writing of the book.  She was pretty much the nicest grandma you could imagine, and I wanted to have a character as nice as that!  A lot of strange and difficult things happen to the main character Lucky in the course of the story, so I wanted there also to be someone who was just unconditionally good and kind and loving towards him.

I loved Dave McKean’s illustrations! Do you have a favourite from Phoenix?

Thank you, I love them too, as you can probably tell from my other answers!  He is a brilliant artist and a great collaborator, and we spent a lot of time talking and thinking about how to do it.  Many of the things the book describes are impossible and unimaginable, so it wasn’t easy!  And yet I think he pulled it off.

It’s impossible for me to choose a single favourite.  But I have to admit, the cover blew my head off when I first saw it!

I also love the book trailer that he made for Phoenix, which animates many of his illustrations in a really beautiful way.

[My blog doesn’t seem to like YouTube Video embedding… but you can just click on the link above, for the book trailer! It’s worth watching… it really is gorgeous (: ]

Finally, do you have any hints about current writing projects?

I’m just beginning the third draft of my new book right now!  The working title of this one is TYGER.  It’s science fiction too, although it’s not space; it’s more of a parallel worlds story.  I’m really excited about it!

My usual routine is: get up in the morning, go to the library, and write.  I write in the library because I’m not disciplined enough to work at home; there are just too many distractions.  Much as I love Twitter (where I’m @whatSFSaid), it’s disastrous for your concentration!  I find it much easier to focus in the library, and I work there every day, unless I’m doing a school visit.

But my aim is always to make my books as good as they can possibly be, and that takes a lot of drafts, and a lot of time.  Phoenix took 13 drafts in the end (Varjak Paw took a horrifying 17!) so it might be a while till it’s ready…  but I hope not too long!

Wow! I can’t believe it took 13 drafts- but it was definitely worth it. Phoenix is an awesome read, and I really recommend it! Thank you so much to SF Said for the interview. I really loved it, so I hope everybody else does!

5 thoughts on “An interview with SF Said!”