By Whitley Strieber, published by Coronet. 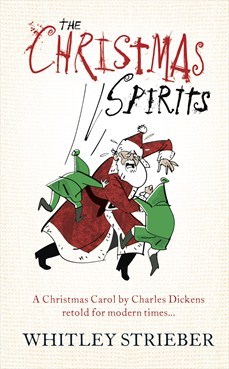 Goodreads Synopsis: George Moore is a modern day Scrooge, a futures trader who drives his staff hard, and won’t let his assistant go home to look after her autistic son on Christmas Eve.

Like Scrooge he is mean with money, but he is also mean with his sympathies and his time. He has to swerve to avoid putting money in a charity box and also crosses the road to avoid a family he thinks are probably gypsies on his way to dinner at a cheap cafeteria. An old man sitting nearby looks as if he might be looking for the warmth of some human contact. George refuses to meet his eye and hurries home.

Various slightly odd, even disconcerting things happen. He encounters a nun who looks like an elderly child. He sees a Santa in the window of a department store, who seems to emerge from his Grotto, look confused, and is then surrounded by small elf-like figures who drag him back behind the curtains. Finally, when he arrives back in his apartment the old man from the cafeteria suddenly appears and reveals himself as George’s old mentor in trading and in greed. Bill Hill reveals that he is dead and that he has come to give George a warning. He warns George he will have three visitors that night, and then in a flash he disappears.

So it comes about that, as Bill Hill said, George receives three visitors that Christmas Eve, just as Scrooge was visited by the Ghosts of Christmas Past, Present and Future. But these are not the ghosties and sprites that frightened Dickens’s readers. George’s visitors are more ambiguous, more frightening to a modern sensibility. They are visitors that will give even today’s reader goose bumps.

My Review: I haven’t read a lot of festive books this month! But, I wanted to try and read one very Christmassy one so I picked up this. I love A Christmas Carol, and I love grim, modern stories too: So putting those two together should be really awesome.The Christmas Spirits I wasn’t really sure about! It’s a quick, quite fun read, but at the same time, it was too short to grow to like the story very much or have a really layered plot.

George Moore is a really realistic modern day version of Ebenezer Scrooge. He’s tight with money, hates giving to charity, and despite being a millionaire he still lives in an old flat and only eats discounted things just to keep his bank balance high. He didn’t seem very unique to me though; but I guess that wasn’t the point, because he is a modern version of a classic character! There were points where you really, really hate him, and points where you quite like the changes happening to him. He does develop a lot throughout the book, but I couldn’t really connect to him or any of the other characters. Was that because they weren’t detailed on enough, or because it was such a short read? I don’t know!

The plot, for an under-200-page story, was a bit… all over the place, to me. This book was pitched to me as a scary read, thanks to the quote on the front of my copy. I didn’t find it was terrifying. If anything, I think this book was intended to be a feel-good story… thanks to the quite heart-warming ending. In the first hundred pages, I was a little lost. Nothing was explained really well in my opinion, and everything moved really fast. There were parts of the book that were really good ideas, and well written but didn’t… go with the story! Such as, the scene with the orphans and Moore being charitable, but everything goes wrong. It was slightly unrealistic, but well written . It took up a large part of the book, but didn’t quite match with the story. If you took it out of the novel, the other events wouldn’t have really been affected. I just felt some things were put into the book for the sake of it. Parts didn’t really fit together for me.

Though there were a few points of the book that I disliked, I really did love the ending. Despite a bit of a haywire plot, everything seemed a lot better in the last 50 or so pages. It’s predictable, because I know the events of A Christmas Carol and Tiny Tim, and I really did love that ending, with George Moore finally being less heartless and pretty much saving the day. It was a really sweet ending, and I think it definitely made up for the rest of the plot, which I just really couldn’t get my head around!

Overall, The Christmas Spirits definitely wasn’t an amazing, unforgettable book. But, at the same time, it did have a lot of good points. I wish it could’ve been longer: That would’ve given the story more time to unfold properly. A lot of points felt rushed and really hasty to me! George Moore is a clever representation of the classic Scrooge character, but I did find it a lot harder to grow to love him at the end like I grew to love the classic, original Scrooge. Recommended for anybody who wants a festive, but short read; though of course, the original is the best and this one was quite hard to get into!

I borrowed a copy from Dad’s bookshelves!