First review of the fortnight! I devoured this book in a couple of sittings over the weekend, and it was brilliant. There can’t be a steampunk event without a Philip Reeve book, right? Here’s the first in his MG/Teen series- Larklight! (:

By Philip Reeve, published by Bloomsbury. 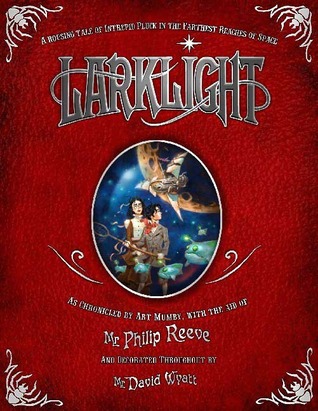 Goodreads Synopsis: Arthur (Art) Mumby and his irritating sister Myrtle live with their father in a huge and rambling house called Larklight…that just happens to be traveling through outer space. When a visitor called Mr. Webster arrives for a visit, it is far from an innocent social call. Before long Art and Myrtle are off on an adventure to the furthest reaches of space, where they will do battle with evil forces in order to save each other–and the universe.  A fantastically original Victorian tale set in an outer space world that might have come from the imaginations of Jules Verne or L Frank Baum, but has a unique gravitational pull all its own…

My Review: This was the best book to start the fortnight on, as it was so rich with imagination and craziness. I loved it! The story begins with a brother and a sister, who are living in a crazy, huge house-mansion-ship in space called Larklight, which was their mother’s home before she died. Already, I was sucked into the story, because the premise was so awesome. The time of the events in the book is the early 1800’s- but the Victorian era I’ve learned about here has a massive twist. Victoria’s empire has expanded not only over the globe, but over space and surrounding planets. I couldn’t help but squeal here. It was so original and a really fun setting!

This book doesn’t hang around, world-building before the action. The details all fall into place perfectly over the course of the book, and you’re thrown into the action almost immediately. Larklight gets a visitor ,which Art and Myrtle are immediately already suspicious of. Then, when this visitor turns out to be a giant spider with a giant army, things happen. Creepy things, and adventurous things, all of which I don’t want to detail on in fear I’ll drop spoilers- but I’ll just say that it was so fun following everything! This book would suit anybody- whether they love sci-fi, fast-paced adventures, or pirates, or space. Or pirates in space (This happens! How brilliant! It had a very Treasure Planet feel.)

The story moved quite fast for me. With a lot packed into the plot, I was expecting the pace to be a little bit slower. However, the book moved really, really quickly. I did have to read over a few paragraphs at multiple points, because there was a lot to take in. Larklight really is a wild adventure, and moved a bit too fast in places, but that was made up for with the writing style- a twelve year old’s perspective!

Art is such a great character. Philip Reeve has captured a twelve year old’s personality so well. Art is a really easy character to like, and the story is written by “him,” so in places he complains a lot about his older sister, and skips to the battle scenes. His actions, and perspective on everything, made me giggle a bit. I couldn’t stand his sister Myrtle- though. She just seemed the opposite of Art; stuck up and unfriendly. I think it was intended for a reader to dislike her at first- because later in the novel, we get her diary entries, and whilst she’s still a bit annoying in them, I did grow to like her a little more through those.

Overall, Larklight is an imaginative,  roller-coaster of a book! The world was simply amazing- I loved the historical aspects that Philip Reeve has used, and put his own twists on. All so original! I planned on not reading the sequel (Starcross) this month yet, but I might end up reading it, actually- I want more of the setting! More of the adventure! The plot in Larklight has a very strange mixture of everything, but it all works, thanks to Philip Reeve, and his brilliant writing and world-building skills. The two siblings whom the story is centered around are both very three-dimensional characters, though I still really couldn’t like Myrtle much. Hopefully she’ll become more likeable in the rest of the series. I can’t wait to read on!

I purchased a copy of Larklight from a local bookstore!

2 thoughts on “Spotlight on Steampunk: Larklight”