Kicking off Halloween Reads on my blog, I’ve got a five star review of a brilliant zombie book! Yay, awesome way to start my horror marathon! ;D 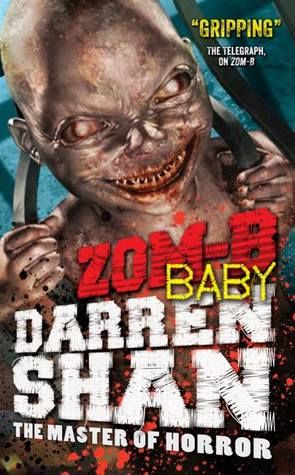 Goodreads Synopsis: B has spent the last few months bunking with the Angels, a group of teens dedicated to eradicating the evil dead from the face of the earth, beginning with the undead roaming the abandoned wreckage that was once London.

But the Angels’ mission is a bit more complicated than that, and B takes to the streets of a very changed London to decide: is it a mission really to be believed? But instead of answers, B finds a horror beyond imagining.

My Review: **Spoilers for people who haven’t read book one!!!**

Eek! ZOM-B!!! If you’ve been following my reviews for a while now, or my tweets, you’ll know that I am an obsessive when it comes to ZOM-B. I just love the series so much, and this title’s definitely become my favourite of the five out so far!

One thing I’d almost completely forgotten about from this series was B Smith’s nightmares in Book One. She had recurring, macabre dreams, of flesh eating babies crawling over her… (If you’ve gotten freaked out by this, avoid this series at all costs. It gets worse. 🙂 ) and then the dreams vanished because she became a zombie- therefore not needing to sleep. The nightmare themes had been abandoned in ZOM-B: so I thought. But, now the babies are back- and they’re even more terrifying! Darren Shan has managed to create another horrific creature that will keep you awake at night. Do not read this book in the dark!

As this is the fifth book, we’re nearly halfway through the series now. I was, again, slightly worried. What if this is where the plot just dies? What if the story just runs out, and then just stretched out aimlessly over the next books? I really need to stop doubting the critically acclaimed master of horror- Shan can throw in plot twists that open up new doors in the plot and leave you shocked, beyond comprehension. After a book focusing entirely on the ANGELS- teenage zombies who are more human than others, I was lured in to trusting them, wanting the series to settle with them. Then, B, being her entirely unpredictable self, has decided to take a new route, re-visiting a character that I really loved, who’s been left alone for a while!

Though I first interpreted this as “she didn’t get on with certain characters, she needed to move,” I later realised that maybe that linked back to the religious aspects of the series. B’s father was a racist and his actions sometimes influenced B’s. Was it because she was uncomfortable being part of this religious army? I think, if that was true, it had a really interesting hidden point to it. As for the re-visited character… I can’t really detail here without giving away any spoilers about the book- all I can really comment on is Darren Shan’s methods of twisting your emotions. Mr Shan, why must you make character I love suffer so much?!

B Smith, you awesome person. I hated your personality a bit in the first book… but I’ve grown so attached to you now! B’s developed so much throughout this series- and that’s definitely visible, in ZOM-B: BABY especially. I could, also, see her torn, apocalyptic version of London through her eyes so well. I felt what she felt, as well as saw what she saw. She doesn’t show it, but B really does have a lot of emotions that affect her actions in the book. I really loved her, just entirely! She also makes me laugh a lot, with her cocky retorts and insults.

Overall, I just loved ZOM-B: BABY. It’s probably the best book in the series by far yet. Darren Shan has made clever ties with events from previous books in order to create a plot-twist-ridden, pacy, thrilling book, that I was unable to put down! I love these books because they’re full of action. They’re fast paced, they’re tense… and they’re addictive. I devour each of these books in a few sittings; they’re great for fans of horror of any age to curl up with! Highly recommended, though obviously read the first four books or you will have no idea why zombie killer babies have been created and are prepared to kill people with their fangs and general freakiness. Oh, yeah… not for the faint hearted people out there…

My copy of ZOM-B: BABY was purchased as a gift.