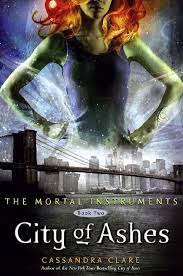 **SPOILER ALERT FOR PEOPLE WHO HAVEN’T READ CITY OF BONES! (And spoilers about City of Ashes, in the review)**
After the events that took place in the first novel in The Mortal Instruments, City of Bones, Clary just wishes that her life would go ack to normal, and that her mother would wake up from her life-threatening coma. But she can’t keep Jace out of her head… even though she discovered that he is her long lost brother. Can Clary try and forget about her old love for him as she builds a new relationship with Simon? And what will happen to Clary and Simon’s relationship when Simon becomes a monster?

I enjoyed this so much- just as much as the first book in the TMI series! Cassandra Clare’s writing has blown me away… again. I think that the style this book is written in was complex and clever- I loved how, within chapters, the scenes switched every few paragraphs to another major character. That was really well executed, and gave me a three-sixty degree view on what was happening. The plot was great, with some clever and unexpected twists. I really wasn’t expecting Simon to turn into a Vampire! That was very unexpected and I loved how that developed from the minor event of Simon biting a vampire in defense, in the first book. The only thing that confused me was that at the end of City of Bones, Clary and Jace rode off into the New York sunset on the back of a flying motorbike, in love, and at the beginning of City of Ashes, they were totally avoiding her. I would’ve like to have known what happened to make them grow apart so quickly!

Clary was a strong, fun protagonist, and was just as great as she was in the first book. Also, I feel that in City Of Ashes I got a much better insight into her feelings Simon. Her emotions about being torn between two boys were conveyed really well in the book. I think I got to know Simon a lot better as well; because he turned into quite a major character in this sequel, and he was really cool.

In all, City of Ashes was a brilliant sequel and definitely worth reading. I can’t wait to read the third!