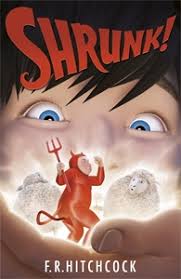 Have you ever made a wish on a shooting star? Tom has, but his wish has gone terribly wrong!

Tom is your average, nearly 11 year old boy. He has just moved in with his parents and grandmother at ‘by-water-by-sea’ and hasn’t exactly settled in at his school or home. He is called names like ‘model village’ because of the house that he lives in. All around it is a miniature replica of the town, as his grandma owns it!

It is at the model village when Tom makes his wish on the shooting star. But it doesn’t come true. Instead, something incredible yet dangerous has happened… Tom now has the supernatural power to shrink things!

By Accident, he shrinks Jupiter. But now, with no Jupiter in the solar system, the magnetic pull of everything has messed up… and Earth is set on track to hit the Sun! While meteors are crashing all over the place and Tom is trying to hide his shrinking powers, can he and his new accomplices save the day by getting Jupiter back to its normal spot?

This is another one of Hot Key Book’s awesome reads! It’s probably the only book with an age range of under-teens, (The rest is all a teen range, check them out too!), but lives up to the same expectations I had of all of the other seven releases. It’s a great read for around age eight, but I have to say, I enjoyed it as much as eight year olds probably would. The book, Shrunk, is an epic, one of a kind sci-fi adventure with a funny twist. It’s actually really sad, but has such a lovely ending, with lots of unexpected humour!

All in all, I would really recommend it; to little people and the teens- it’s an awesome, small novel. But there’s a catch… once you’ve read this, you’ll really want to have Shrinking powers! I know I do! (But obviously I wouldn’t use them to shrink a planet, I now know the consequences!).