Hello again, for the last post of the year 🙂

Last year, I did a post called “15 in 15” because considering it was 2015, the number worked. I thought I’d do a follow up “16 in 16” but… I think I’ll be sticking to fifteen because if I keep that up every year, these lists are going to keep getting longer!

Read on to see what were my favourite books of the year, as well as my top picks of music, film and TV. The majority of titles in all three categories were released in 2016, but some are slightly older things that I’ve discovered.

Last year I read something like 190 books, and this year, I’ve only read just over 50! I wouldn’t say this has been my best year for reading, but I have discovered some fantastic books. Unboxed by Non Pratt was unexpectedly poignant and Everything Leads to You has become one of my favourite books of all time. 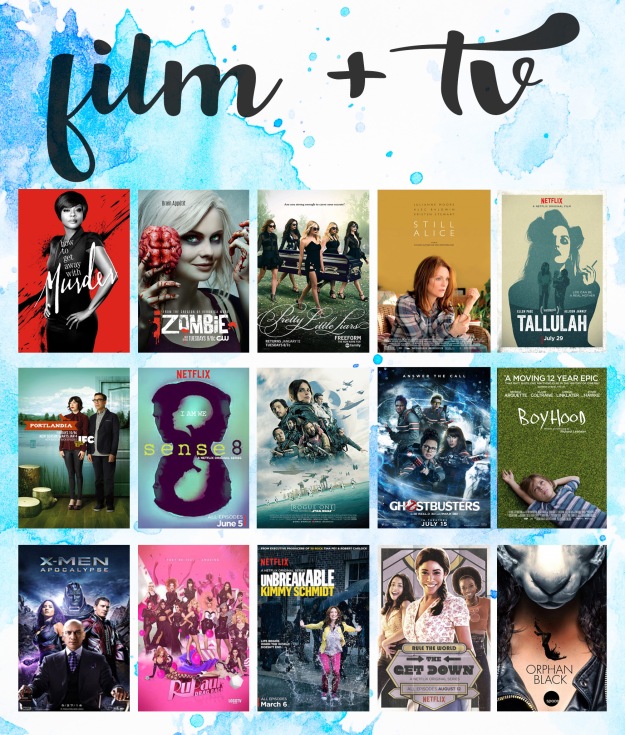 After my GCSEs ended, I spent a month in bed, on our newly-purchased Netflix, binge watching a gazillion tv shows. I adored How to Get Away With Murder and The Get Down, two shows that weren’t even on my radar at the beginning of the year, but I’m now a massive fan of. Movie wise, the Ghostbusters reboot has to be one of the best things to have happened this year. Bless Kate Mckinnon. Rogue One was pretty fantastic too.

2016 may have been rubbish, but the music that came out this year most certainly wasn’t. Honestly, I could write pages about every album above. I adore them! While I’ve been veering more into indie sounds, I was also introduced to Sleater-Kinney, one of the most iconic riot grrl bands, and so many songs of theirs have become hugely important to me. Tegan and Sara’s Love You To Death is literally the best thing to have ever happened, and will forever be a favourite and special album. I’ve gotten into quite a few new artists, like Shura and Lauren Aquilina, but my favourite new discovery is probably Christine and the Queens, who’s the musician everyone needs in their life.

So, there we go! That’s another whole year of stuff. 2016 was a bit rubbish in general, but at least there’s been some great media to distract us from it, eh?

And before I go… A huge THANK YOU to everybody who has been reading my blog this year. I am hugely grateful for every view, like and comment on my posts, and seeing that people enjoy my ramblings is what makes me keep blogging!