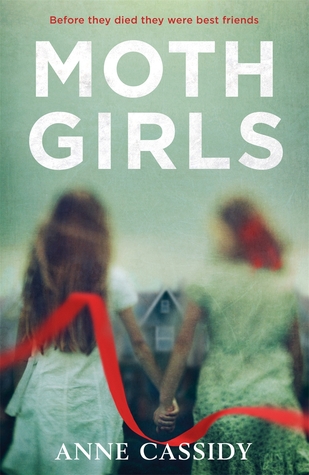 Goodreads Synopsis: Helplessly drawn like moths to the light, two girls go missing in an evocative and gripping tale . . .
They called them the Moth Girls because they were attracted to the house. They were drawn to it. Or at least that is what is written in the newspapers that Mandy reads on the anniversary of when her two best friends went missing. Five years have passed since Petra and Tina were determined to explore the dilapidated house on Princess Street. But what started off as a dare ended with the two girls vanishing. As Mandy’s memories of the disappearance of her two friends are ignited once again, disturbing details will resurface in her mind.

My Review: I really enjoyed Anne Cassidy’s Looking for JJ and Finding Jennifer Jones quite recently – so when I heard of her latest book, I was really looking forward to reading it!

Cassidy is a master of YA crime books – a genre I feel is a little neglected. Her writing is fantastic, her stories always suspenseful and addictive to read. This one was no different – I was sucked into the story straight away, eager to know what happened to Tina and Petra, the two girls who went missing after entering an almost-abandoned house. The pages were pretty much turning themselves – I read this over a day, I was so engrossed in it!

I really liked the angle of the book; it heavily focuses on how Mandy, the girl who didn’t go to the house, is affected by the events half a decade later. The emphasis on Mandy’s psychological state, and how she was affected by her relationships with the two girls, was really interesting – I would have loved to see more scenes of her counselling sessions, as the way Mandy unravels how she feels is so well written.

The book isn’t just centered around the main crime story – I found the back-story of Petra, one of the missing girls, to be my favourite part of the book. Cassidy tackles a lot of very sensitive themes well, I think, and some scenes between Petra and her father felt quite unnervingly real.

The story is told in various parts, switching between before the vanishings, and five years after them. The mystery unravels slowly throughout the book, and as soon as you think you’ve figured out what happened, there’s another plot twist. The ending did feel a little disjointed to me, as the final elements of the puzzle seemed to be put together a bit too fast. Although it did leave quite an adept cliffhanger, I would have liked to know one tiny bit! [The next sentence is a spoiler – highlight to read] I think the story with Mr Merchant and his money could’ve been solved a little better – what was it all about?

Overall, I think Moth Girls is a perfect, relatively short read for fans of crime, or those who want a brilliant book to get into the genre with. The plot is inventive, unexpected and hard to stop thinking about once you’ve started reading! Anne Cassidy’s characters are always so well-developed and enjoyable to read about. Recommended!

I received a copy of Moth Girls from the publisher, in exchange for a review. In no way at all did this affect my thoughts.