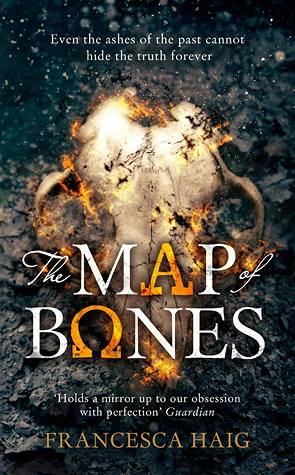 Goodreads Synopsis: When Zach and I were born our parents must have counted and recounted: limbs, fingers, toes. We were perfect. They would have been disbelieving: nobody dodged the split between Alpha and Omega.
Nobody.
They were born together and they will die together.
One strong Alpha twin and one mutated Omega; the only thing they share is the moment of their death.
The Omegas live in segregation, cast out by their families as soon as their mutation becomes clear. Forced to live apart, they are ruthlessly oppressed by their Alpha counterparts.
The Alphas are the elite. Once their weaker twin has been cast aside, they’re free to live in privilege and safety, their Omega twin far from their thoughts.
Cass and Zach are both perfect on the outside: no missing limbs, no visible Omega mutation. But Cass has a secret: one that Zach will stop at nothing to expose.
The potential to change the world lies in both their hands. One will have to defeat the other to see their vision of the future come to pass, but if they’re not careful both will die in the struggle for power.

My Review: From her début novel, I can already tell that Francesca Haig is already a rising star of fantasy: I’m sure I’ll be reading a great many more books from her. The Fire Sermon was an incredibly inventive and original work: I’ve never read anything quite like it.

The world-building was stunning. I found the idea behind the novel actually plausible – after a nuclear war, dubbed ‘the Before,’ the leftover radiation has tampered with the evolution of the human race, and now newborns always come as twins – one stronger Alpha and one weaker Omega. It was such a great premise.

I’ve been really interested in reading about dystopian societies recently, and The Fire Sermon has such interesting politics on the Mainland, where the book is set. I found the way the Alphas and Omegas interacted very thought provoking; as not only is the segregative behaviour very shocking, but it can be compared and related to real life past – and current – situations, and I think that brings a further sense of realism to the novel.

I really enjoyed the plot of the novel, for the most part, as Francesca Haig wrote some awesome plot twists. I can’t wait to see how the situation develops further in the next book. The beginning and the ending were enthralling, but I did feel like parts, especially towards the middle of the story, got a little dragged out – much of the book was the protagonists just running!

The main protagonist, Cass, was really likeable and I did enjoy her story but I don’t think I warmed to her as much as I thought I would. Her background was so interesting; Cass was born the Omega, but she suffered no visible affect. Instead, she has a different kind of mutation… and it made the story so so tense and gripping! The other main character of the story is Kip: and though the reveal of his past was really great I got so tired of his dialogue. I’m not sure if this was just me but he seemed to almost always talk in a really sardonic way. His frequent sarcastic remarks towards everything did irk me a little.

Overall, I think The Fire Sermon was a very stunning début novel. I’d definitely recommend it if you’re a fan of fantasy – or if you’re like me and love a book with an inventive world and a societal focus. Admittedly I did find some parts a little repetitive where it was just walking/running away/etc etc… But The Fire Sermon was most definitely an incredible and thought provoking debut.

Also: In this post I wanted to take a moment to highlight the amazing Advanced Reading Copies / publicity campaign for The Fire Sermon! It was so cool. The premise of the book is that people are born as twins, either Alpha or Omega – so proof copies were labelled as one of the two, and numbered. It was really fun finding my twin Shannon!

I received a copy of The Fire Sermon from the publisher, in exchange for a review. In no way at all did this affect my thoughts.