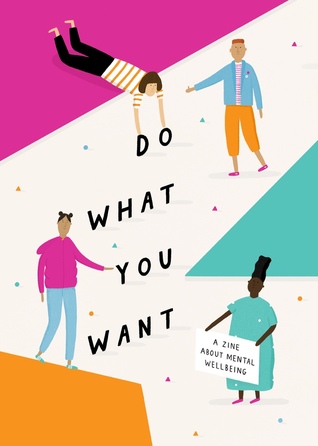 Cover blurb: Do what You Want is a one-off magazine, curated and edited by food writer Ruby Tandoh and her partner Leah Pritchard. Focusing on mental health and illness, it features an interview with actress Mara Wilson; writing from New York Magazine’s advice columnist Heather Havrilesky (Ask Polly); recipes from food writers Diana Henry, Meera Sodha and Bee Wilson; and an exclusive Q&A with Sara Quin of Tegan and Sara.

With essays, comics and poems by contributors from all walks of life, Do What You Want shows that mental wellbeing is for everyone. This is a project in aid of mental health charities and not-for-profit organisations. All profits will be split between Mind, Beat, Centre of Mental Health and more.

My Review: As soon as I’d heard about this zine, I knew I needed to order a copy! I’ve love Ruby Tandoh. So to hear she was curating a zine about mental health with her girlfriend Leah (now fiancees – congrats you guys omg), I was over the moon. As a Tegan and Sara obsessive, my excitement was undoubtedly furthered by the announcement that the zine would include an interview with Sara Quin!

Do What You Want covers a huge variety of mental health issues, from eating disorders to anxiety, depression and the intersectionality of mental health with aspects of identity such as being queer. I adored how broad this zine was, as it’s so eye-opening to read accounts from a variety of people from different backgrounds. I’m sure that many people who read this will find something to relate to, as well as come away from it having learned something valuable. It’s rare to see so many diverse, honest stories in one place like this; that’s what makes the zine so special.

Every contribution is presented absolutely beautifully, whether it’s a personal story, report on statistics and services or a recipe. Presentation ranges from vibrant comics and portraits, to gorgeous illustrations accompanying heartfelt essays, interviews and first person accounts. I took my time reading this to admire all of the work that’s gone into making this book so visually exciting. The uplifting, wonderful artwork perfectly accompanies some incredibly hard-hitting topics.

I started reading Do What You Want during exam season, and that proved it to be the perfect read to dip in and out of. This zine is a wonderful read whether you’re leafing through a passage or two a night, or reading the entire thing in a day.

As I was about halfway through, I did notice there were significantly more female contributors than male ones. It is fantastic to see so many talented female artists and writers in one place. However, I did want to see more representation of men’s experiences of mental health, after reading around the topic previously, and being aware of some shocking statistics. This is still a teeny tiny problem for me with the zine, but it definitely was addressed really well through a couple of contributions such as George Almond’s portrayal of toxic masculinity in a moving account of his family.

Overall, I am so, so impressed with Do What You Want; it’s the kind of book you want to shout about from the rooftops and demand everyone reads. not only is it an amazing resource on mental health information; it’s also a beautiful collection of art and writing, and has raised a lot of money for various charities. This is definitely up there in one of my favourite reads of all time. After selling out its initial 4000 prints, the zine is going into a reprint, so you can still order a physical copy now, or get the ebook if you’d like it sooner!

*NOTE: This review is on the new, updated version of this book, which will be published soon and is now up to date with the latest Percy Jackson book*

Goodreads synopsis: The #1 New York Times bestselling Percy Jackson series—The Lightning Thief, The Sea of Monsters, The Titan’s Curse, The Battle of the Labyrinth, and The Last Olympian—features a dyslexic boy who discovers he is the son of a Greek god, the target of mythical Greek monsters, and the center of a prophecy that could change the balance of power in the world forever. In Demigods and Monsters, YA authors take on the series’ Greek gods, demigods, monsters, and prophecy, to add insight and even more fun to Riordan’s page-turner series.
The book also includes an introduction by Percy Jackson series author Rick Riordan that gives further insight into the series and its creation, and a glossary of ancient Greek myth, with plenty of information on the places, monsters, gods, and heroes that appear in the series.

My Review: I’m not entirely sure how to review this book, seeing as it’s not a story, as such! This review will be quite different to my usual ones.

I’m such a big fan of the Percy Jackson series! I’ve been a fan for years, when my dad used to read The Lightning Thief to my brother and I at night. I was so excited to start this, because it contained a collection of essays on the books, and Greek mythology relating to Percy Jackson. The introduction by Rick Riordan was really great, and got me into high spirits about the rest of the book. As for the essays in there? Brilliant! Bar a few that I couldn’t really get into, because they were a bit too detailed for me, the collection was very enjoyable.

They touched on some really interesting subjects, exploring into the symbolism and history behind Riordan’s awesome trilogy. Many are really in-depth, giving some really intriguing (and shocking!) information on Greek myths. I was really drawn into them, because the subject is just so interesting for me. So, even if you’re not a fan of the Percy Jackson series and just a lover of Greek mythology, it’ll probably still be worth reading. Also, many of the essays are laced with a pinch of humor, livening up parts. I think that made the writing even more fun.

Quite a few of the authors, I haven’t read anything from, though I had heard of many. One author I’d read from before was Elizabeth Wein, author of Code Name Verity. I especially liked her essay- it was very different compared to the mythological others. Her’s was all about dyslexia and ADHD, the disabilities that Percy himself has.

Lots of the other essays were great! My favourites were the ones not written like your standard essay. One was an author going over well-known Greek Gods and deciding which ones would be best as parents (She had an awesome choice!). Another author had the really imaginative idea of giving the Divine parents of some of the Half Bloods school-style grade (The American A-F), based on their parental skills. That one was pretty funny. My other favourite was by an author who had kinda fallen in love with Hades. That had a really good take on the Underworld God.

Lastly, I think that the glossary that took up the last quarter of the book. It’s a giant A-Z of all things Greek and mythological, mostly, and great for if you’re looking for answer to things in the Percy Jackson series, studying on mythology, or just an interested Geek like me.

Overall, Demigods and Monsters is not the kind of thing I read- it’s not a story, and  it’s kind of classed as Non-Fiction- because it’s basically studies on something. However, I grew to really enjoy it. The essays are fun, interesting, and give great insights into the background of Percy Jackson and Greek Myths. It’s a must for all Percy fans! I read the whole thing in about a day, really intrigued by the author’s takes on all of their subjects. The writing was really brilliant, serious and humorous at the same time. I’ll probably definitely read some more books like this, on books I like. I’ll also probably look out for some of these author’s books, too! I really enjoyed most of the writing, so I think I’ll enjoy their fiction stuff too.

I received a copy of Demigods and Monsters from the publishers via Netgalley, in exchange for a review. In no way at all did this affect my thoughts.