Anti-Bullying Week starts today, the seventeenth, and runs until the 21st. It’s celebrated in schools across the UK to raise awareness of bullying, and how to prevent and solve it. (Last year, I made a blog post for Sophie’s themed week.)

Penguin Random House are the publishers of the fantastic WONDER by R J Palacio, and they’ve teamed up with the Anti-Bullying alliance to bring the #ChooseKIND campaign to schools (find out more here). It’s a brilliant scheme to raise awareness of bullying and promote kinder behaviour, especially in youth – and inspired by Wonder, which is a beautifully written tale of bullying, bravery and kindness.

I read Wonder at the start of 2013, and was completely blown away by its raw emotion and beautiful narratives. It’s marketed as a Middle Grade book, but can be read and adored and treasured by anyone of any age. It’s a novel about a boy called Auggie, who’s just about to start middle school after years of being home-schooled, and his ups and downs of navigating a new life while being labelled as different because of the way he looks. It’s unforgettable, moving and inspiring.

365 Days of Wonder is a tie-in gift book that was released earlier this year. It was inspired by precepts and quotes given by Mr Brown, Auggie’s teacher in Wonder – and all of the inspirational quotes readers sent in response, to R J Palacio. There’s a quote for each day of the year – it’s such a beautiful book to treasure.

To coincide with Anti-Bullying Week, and the #ChooseKIND campaign, I’m running a giveaway! One person will win Wonder & 365 Days of Wonder. Entry by the Rafflecopter link below…

click on the link below to go to the Rafflecopter widget!

T&C’s, etc.: Unfortunately I can’t cover the cost of sending the prize overseas – this is a UK only giveaway. The giveaway prize was provided for me by the publisher, and I will be posting it myself: I’ll let the winner know when it’s been posted. The giveaway will end on Monday, 24th November. To be completely fair, I’ll pick the one winner through Random.org. I’ll try to post it before December 10th, so it doesn’t get lost in all the Christmas-post madness!

Good Luck! You can check out more about #ChooseKind by using the hashtag on Twitter or clicking here. 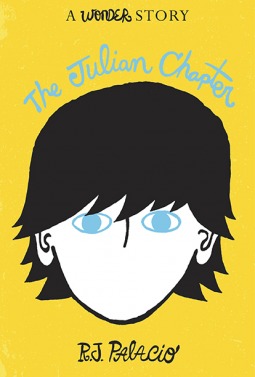 Publisher’s Synopsis: Over 1 million people have read Wonder and have fallen in love with Auggie Pullman, an ordinary boy with an extraordinary face. Now readers will have a chance to hear from the book’s most controversial character—Julian.

From the very first day Auggie and Julian met in the pages of the #1 New York Times bestseller Wonder, it was clear they were never going to be friends, with Julian treating Auggie like he had the plague. And while Wonder told Auggie’s story through six different viewpoints, Julian’s perspective was never shared. Readers could only guess what he was thinking.

Until now. The Julian Chapter will finally reveal the bully’s side of the story. Why is Julian so unkind to Auggie? And does he have a chance for redemption?

My Review: The Julian Chapter was a story I fell in love with from the start. It’s engaging, emotional, and incredibly powerful. Spinning off from Wonder, R J Palacio’s much loved début, The Julian Chapter tells the story of the bully who hated Auggie for his looks.

As soon as I’d gotten an email about this spin-off chapter, I was too excited for words! I fell in love with wonder last year. It was so moving and powerful. I couldn’t wait to hear more from R J. I started the story straight away and once I’d begun, I couldn’t stop. I was so engrossed in the story! Julian was a character whose narrative wasn’t in Wonder, which switched between the viewpoints of lots of people in Auggie’s life. I was so glad I could finally see through Julian’s eyes.

The writing, of course, is brilliant. R J Palacio has adopted the voice of a middle-school kid really well. Julian’s voice is really distinctive and realistic. I could feel his anger and fear about the situation he was in because of Auggie. If you read Wonder, you’ll have really disliked Julian for the things he did to Auggie. I did. But in this novella, I got to understand all of the reasons behind his actions. Obviously, the things he did are still awful- but The Julian Chapter has made all of his actions make sense, and it’s built a really good back story to one of the most complex characters in the story.

The Julian Chapter tells Julian’s side of the story in Wonder, then goes on to after the events of Wonder. I loved how much Julian develops throughout the story. He changes into such a different person over the course of the novella, and honestly, the last few chapters made me start crying. I grew to forgive Julian, and liked him by the ending; The Julian Chapter shows how it wasn’t all Julian’s fault- how his actions were caused by so many things. I love that R J Palacio has made Julian such a more understandable character with an eighty page story.

Overall, The Julian Chapter was just… amazing. It’s poignant, honest, and written so well. I loved hearing Julian’s voice, and learning about his life and back story. The Julian Chapter gives a whole new side to the story. If you loved Wonder, I cannot recommend this highly enough! For an under-100-page story, it’s unbelievably emotional and engaging. I won’t be forgetting The Julian Chapter any time soon!

I received a copy of The Julian Chapter, in exchange for a review. In no way at all did this affect my thoughts.