I haven’t helped on a blog tour for a while, so this post is pretty exciting! 🙂 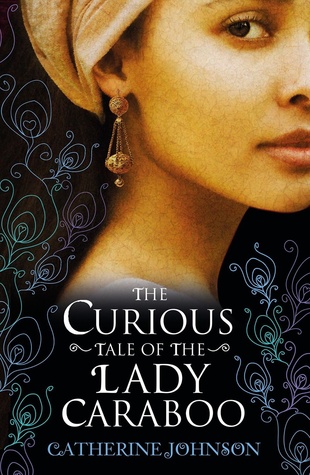 The Curious Tale of the Lady Caraboo is a YA historical romance by Catherine Johnson, author of Sawbones. It’s out on July 2nd, and for this blog tour Catherine is here on the blog to give some diverse book recommendations!

Hello and thank you so much for inviting me onto your blog to share some books.

There are honestly more books with diverse characters than you might imagine. It really is a question of looking for them.  There are even more where the sidekick or the love interest is a POC or LGBT or ‘different’, even though we all are. Different, that is.

So I’ve decided to rule those out – who wants to be the sidekick?  Most of us have been fed up with being the sidekick since primary school.  What we love about books is the chance to be swept away to stand in the shoes of someone else and see where that takes us. That was one of the reasons I started writing historical stories. I wanted the person in the front, in the swooshy frock to be someone who looked like me.

Anyway. The following are all favourites of mine – even though there is one I haven’t read yet….

This is a fantastic book. It’s set on a council estate in South London as Liccle Bit –  real name Lemar, he’s small for his age  – attempts to ask the girl of his dreams out and not fall foul of the local bad guys. But there is so much more to it than that. This is how a lot of London looks and sounds and the writing sizzles with life. This is Alex Wheatles’ first YA book – he’s written lots for adults – and I hope it’s the first of many.

My favourite book of last year and my favourite YA lead character in a million years. Garvie Smith’s IQ is off the scale, but he is also pathologically lazy, a stoner and (from my adult pov) entirely annoying. I could slap him SO many times! But he’s also charismatic and brilliant and he’s going to find out what happened to the girl in question whether the police – in the shape of DI  Singh- get in his way or not.

I haven’t read this yet but I have pre-ordered the hell out of it. Blackman’s book was truly a blockbuster in every sense of the word. Using reversals to give white readers a sense of what it might be like to be in the minority as well as deliver a cracking story, Blackman builds an utterly believable brand new world and has us willing her characters to win through on every page. I cannot wait to see this as a Graphic novel.

This is one I use in teaching. Look at the first chapter. No, just look at the first line. If you don’t read the whole book after that then I don’t believe you have any kind of a heart. At all. Halse Anderson is a brilliant writer and in this book she takes us back to the American War of Independence and shows us events though the eyes of young Isabel, born a slave.  Fabulous.

A chilling psychological thriller. Why Bali Rai is such  woefully under appreciated UK writer is a massive mystery to me. In this novel, set in a school in modern day Leicester, our protagonist Lily, seems like an ordinary girl,  she’s a little bit insecure and her and her mates spend a lot of time on social media. But the story soon twists as Lily’s life takes a  series of dark turns. This novel handles modern themes, suicide, the internet, and how much we give away about ourselves. It’s one of his best I think.

6 The House You Pass on the Way, Jacqueline Woodson

I have to be honest here, I picked this one up just because the heroine was called Staggerlee – like in the song. She chose the name herself because she felt her given name Evangeline wasn’t fierce enough. That was enough to set me off. And then there’s the writing. Woodson, winner of The Newbery Medal, is an utter genius and this is a coming of age story –  with a lesbian protagonist – that will knock your socks off.

7 If You Were Me,  Sam Hepburn

Another almost brand new book and another one that shows us what London is really like from the point of view of new Londoner Aliyah and her family – resettled from Afghanistan. When her brother is arrested as a terrorist she’s going to fight to clear his name. She finds an unlikely ally in local boy Dan, who has his own secrets. This is a brilliant modern thriller, I can’t recommend it enough.

8 This is Not A Love Story, Keren David

Keren David’s book is unusual for UKYA in being set overseas in Amsterdam and in having a cast of young Jewish teens. It’s about love and identity and dark secrets, but there’s a total and utter freshness and modernity to these young people, to their actions and their choices. It’s like seeing characters come of age as you read.

A couple more very recent books that I LOVE are Only Ever Yours by Louise O’Neill, and Carnegie listed Buffalo Soldier by Tanya Landman, and can I say I am dying to read For Holly from Tanya Byrne? And I am going to stop now or I will go on forever (and ever).

Catherine is the author of The Curious Tale of The Lady Caraboo out July 2 from Penguin Random House.

Thanks Catherine for an awesome post, it was an honour to host it! I better go check out some of these titles now – This is Not a Love Story by Keren David has been on my radar for a while and that’s at the top of my shopping list!