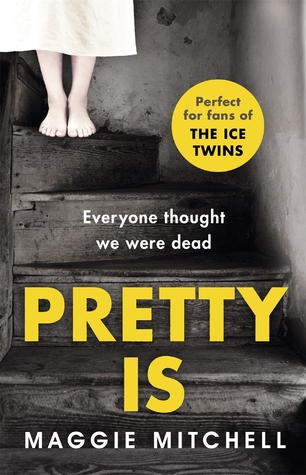 Goodreads Synopsis: Everyone thought we were dead. What else could they think?

One summer, nearly twenty years ago, two twelve year olds
were abducted and kept captive in the forest.

There they formed a bond that could never be broken.

What really happened in the woods that summer?

My Review: When this book came in the post, it looked like a really good read, and the ARC cover was fantastic. I picked it up on a whim, as just something to read between work. The premise sounded quite similar to lots of books I’ve seen before – I didn’t expect to be as blown away as I was! Pretty Is is a stunning, inventive novel, and I’m certain it’s going to be the big début of the year.

The plot is intricate and very well written. I became completely absorbed in the events of the book – it was so haunting and engaging. So many events spiral from the mysterious summer Carly May and Lois are kept in the woods – and all of these different stories come together two decades later incredibly cleverly. I had no idea where the plot could possibly be going from the opening pages right to the ending!

I adored how much time the story takes to delve into the lives of the main characters, and the psychological imprints their abduction left on them. It was incredibly chilling to read about, but also morbidly fascinating.  The book is split into two narratives, Carly May’s and Lois’s. They both had incredibly strong and engaging voices, and seeing how differently they develop was really interesting.

Maggie Mitchell weaves mystery into her novel expertly. Pretty Is is so haunting and unpredictable. I loved how intricate the plot was – it’s such a classic-feeling crime story yet it’s written in such a complex, outstanding way. I finished it feeling like I still wanted to know a bit more about some aspects of the story, but overall, I was truly mesmerised by how powerful of a début Pretty Is was.

Overall, I really highly recommend Pretty Is to those who love chilling and psychological stories. Compelling, dark and addictive, it’s an incredible début novel from a very talented writer. I’m really looking forward to reading more by Mitchell in the future!

I received a copy of Pretty Is from the publisher. In no way at all did this affect my thoughts.