The Hive Construct is Maskill’s début novel and I’m delighted to be a part of the blog tour! Today I’m sharing a guest post from the author, about what influenced him to write the book. Find more about The Hive Construct here!

The Hive Construct’s biggest influence was the year I’d spend prior to writing it studying politics at the University of Leicester. My degree required that I study political systems and social structures and the like, and so it was what was on my mind when I sat down to work out what the story would be. The story is a political story, it’s a story of political strife. The best thing you can do as a creative person is to not just draw on other creative works, but to combine outside interests of yours with your creative inclinations to create something less derivative than it otherwise might be. 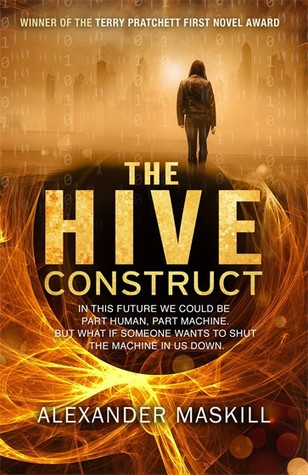 Getting more into other creative influences, the book was, in many ways, inspired by The Wire. I was really interested in exploring a society’s systems from multiple points of view, examining how the institutions of that society inexorably draw them into conflict – and The Wire is maybe the best ever telling of that particular story. The original title for The Hive Construct, which was just “The Hive”, is literally two letters away from “The Wire”, that’s how influential it was on me. At the same time, I wasn’t bound by journalistic experiences in the same way David Simon was, which allowed me to extend the themes into the details of the world-building. It made sense to me to parallel the ways people integrate themselves into the systems around them with people literally integrating themselves into information systems, and extending that metaphor wherever I could. Obviously this drew to mind other stories about transhumanism – Ghost In The Shell, Deus Ex and The Matrix being the most obvious ones in my mind.

The Mass Effect series of video games also ended up playing a significant role in a lot of my approach to world-building. My big dirty secret is that I don’t actually read that much science fiction, so the Mass Effect universe is probably the most developed science fiction universe I’ve ever been invested in. This is obvious everywhere from the way I describe the novel’s portable computers to some of the thematic concerns later on in the story.

Something else I realised a little while later was precisely how subconsciously influenced by the show Legend of Korra my Serious, Adult Political Novel ended up being. Talented young woman goes to a huge city in the middle of a major social upheaval, has often-contentious relationship with both sides and things escalate from there. I mean, I spent less time on fictional sports and love triangles, so maybe I missed a trick there.

Alexander Maskill grew up in East Sussex. He has just completed a Politics degree at the University of Leicester and hopes to follow this with an MSc in Computer Science. The Hive Construct is his first novel and won the 2013 Terry Pratchett Prize.