This review’s going up a bit early – this isn’t published for a while – but I wanted to get the word out about The Big Lie asap! 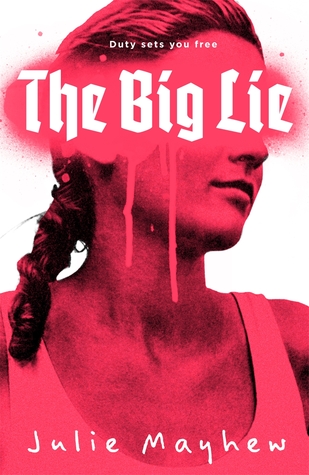 Goodreads Synopsis: A startling coming-of-age novel set in a contemporary Nazi England.
Jessika Keller is a good girl: she obeys her father, does her best to impress Herr Fisher at the Bund Deutscher Mädel meetings and is set to be a world champion ice skater. Her neighbour Clementine is not so submissive. Outspoken and radical, Clem is delectably dangerous and rebellious. And the regime has noticed. Jess cannot keep both her perfect life and her dearest friend. But which can she live without?

My Review: I’ve been a fan of Julie Mayhew’s writing since I read Red Ink in 2013, her YA début (I also recently listened to her radio drama for teens which was awesome) – and was lucky enough to meet her again at a Hot Key Books lunch recently, to find out about her new title.

I was so excited about it! Not only because I like Mayhew’s work but also because the concept of the story grabbed my attention straight away. An alternate history, in which Nazi Germany won the war – England in the present day is under strict Nazi rule. Jessika is just like any other rule-abiding teenager girl in the country – it’s her best friend, Clementine, who everybody is starting to notice is a free-thinker – and things begin to spiral out of the ordinary.

I expected Jess to be the more outspoken one, being the protagonist – I narrow-mindedly assumed she would be the character to lead a revolt against the Nazi regime. But she is not an openly rebellious teen. At the beginning of the story, she doesn’t particularly object to anything the regime has told her to do – because no one has ever suggested otherwise.

She isn’t a revolutionary drive unlike Clementine; but I loved her so much. Jess felt like a real person; like me in places. I definitely would have made the choices she did. Also, Jess isn’t straight (Hurrah! Diverse characters!) Her identity plays a big part in The Big Lie (I’ve always been shocked at how Nazis treated similar people in WW2 and it’s chilling to read about) but it isn’t central to the plot.

I would comment on the world building of the novel but it is literally  modern world in a Nazi rule – there is not much Mayhew left to the imagination, as her quote says on the back of my copy. The fact that the book is so true to all the things that happened under Nazi reigns makes it incredibly unsettling and chilling – from the way women are seen and treated to the harshly controlled media. The Big Lie is written with brutal honesty and it’s scary to think that’s pretty much exactly how we’d be living today if the World Wars had ended differently.

Overall, The Big Lie was another stunning novel from Julie Mayhew and I can’t wait to read more from her! The plot progressed in a way I couldn’t have imagined – and the ending left me pretty lost for words; a surprising cliffhanger but one I think really fitted the unpredictable nature of the book. I wish there were more protagonists like Jess in YA. She definitely stood out to me from all the characters I’ve read about recently. Highly recommended, no matter what your reading tastes are – whether you enjoy historical fiction or books with a dystopia feel. Also, revolution and LGBT* and feminism issues!! It ticks all those boxes and more.

2 thoughts on “Book Review: THE BIG LIE by Julie Mayhew”