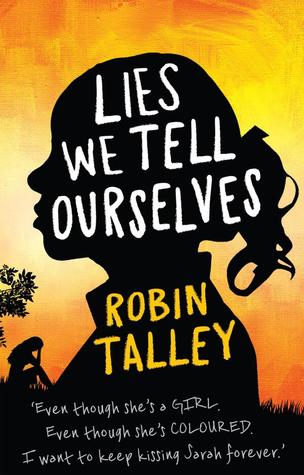 Goodreads Synopsis: It’s 1959. The battle for civil rights is raging. And it’s Sarah Dunbar’s first day of school, as one of the first black students at the previously all-white Jefferson High. No one wants Sarah there. Not the Governor. Not the teachers. And certainly not the students – especially Linda Hairston, daughter of the town’s most ardent segregationist. Sarah and Linda have every reason to despise each other. But as a school project forces them to spend time together, the less their differences seem to matter. And Sarah and Linda start to feel something they’ve never felt before. Something they’re both determined ignore. Because it’s one thing to be frightened by the world around you – and another thing altogether when you’re terrified of what you feel inside.

My Review: I hadn’t heard about Lies We Tell Ourselves until I’d received an email from the publisher, but as soon as I’d read the synopsis I knew it was going to be a really great book! I haven’t really seen much, and definitely not read much YA fiction based around the civil rights movement in the 50s & 60s… And I don’t think I’ve ever heard of any YA books centered around LGBT characters in that era.

Needless to say I delved straight into the story very excitedly, as I was sure this would be an amazing, original début. I was certainly awed by the story. It was moving and powerful, and I’m sure I’ll be recommending it to lots of people. However, after finishing it, I couldn’t help but feel I was missing something… Though I can’t completely work out what!

The narration was really memorable. Roughly, the first third of the book is from Sarah’s perspective, then after the first pivotal moment, the second third is Linda’s – and finally the last third is quickly alternating chapters. Both girls’ voices were really amazing. I felt really familiar with both of them and was rooting for them, for the entire story! Both of them develop so much, especially Linda, who’s grown up with a segregationist father, but realises what mistakes she’s made as she grows closer to Sarah.

I think it was admirable how Lies We Tell Ourselves dealt racism. It wasn’t sugar coated or toned down – it was alarmingly real. I didn’t actually realise how hard-hitting and brutally honest the topic of racism would be tackled in Lies We Tell Ourselves – I was actually tearing up within the first chapters, reading the all-too-vivid scenes where Sarah is at the receiving end of some awful abuse at Jefferson High.

The main thing that I struggled with in the story is hard to explain, because I really want to keep this review spoiler free! By the ending, a lot of the story was resolved, but there were certain key elements to the story that I was expecting more elaboration on… The ending left me really wanting a sequel, or some kind of follow up, to say the least. I felt there was a lot more to tell about Sarah and Linda!

I received a copy of Lies We Tell Ourselves from the publisher, in exchange for a review. In no way at all did this affect my thoughts.

Unrelated note! Sorry for having not written a blog post in just over a week now – I usually aim to get at least one or two published every week. Last week was the first full week back at school and it was even more chaotic that I’d assumed it would be! I also found out I’ll be doing most of my GCSE coursework and some GCSE exams a year early, which I wasn’t expecting, over the next year… so sadly I think I’ll be blogging less often, though trying to schedule more!