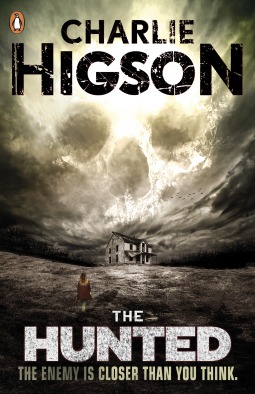 Goodreads Synopsis: The Hunted is Charlie Higson’s sixth terrifying installment in the thrilling The Enemy series. The sickness struck everyone over fourteen. First it twisted their minds. Next it ravaged their bodies. Now they roam the streets – Crazed and hungry The others had promised that the countryside would be safer than the city. They were wrong. Now Ella’s all-alone except for her silent rescuer, Scarface – and she’s not even sure if he’s a kid or a grown-up. Back in London, Ed’s determined to find her. But getting out of town’s never been more dangerous- because coming in the other direction is every SICKO in the country. It’s like they’re being called towards the capital and nothing is going to stop them…In the penultimate book in The Enemy series, the survivors’ stories cross with chilling consequences

My Review: I was so incredibly excited when this came through the letterbox! I’ve been a fan of The Enemy series pretty much since it began, and the first book was the second title I ever reviewed here. (I was eleven, ignore the awfulness:P) Higson is one of my favourite writers in the horror genre.

Needless to say, though, I’m always terrified when the latest installment of the story is released – partially because Higson is like JK Rowling and loves to kill characters I like, but also because I’m scared I won’t love the latest book as much as the previous one. However, I dived into The Hunted with pretty high expectations, and all of them were met. I really loved it.

I love siblings Ella and Sam in these books – Sam is a lot more central to the plot though, and the focus has never been entirely on Ella.. I was so glad The Hunted focuses largely on her. She’s such a small but brave girl and makes for a great protagonist. I loved her even more after this book. Her bond with Scarface, the unlikely ally she picks up along her journey, was really memorable and the plot twist that spirals from their friendship was so unpredictable – as was most of the plot!

I love horror books but I’m rarely genuinely freaked out by events in them – but Charlie Higson’s books are exceptions. I should probably be used to jump-scares and gory plot twists hiding around the corner in his books by now, but Charlie Higson is amazing at weaving eerie tension into his stories, and I found myself again jumping at the most horrific bits.

The only thing I disliked a little was the structure… I can’t actually remember if it’s how the other books were written, though! I was expecting alternating chapters between the two different groups of characters the story’s focused on, but the first half was one focus, then after a certain point it switched. Though I did enjoy that I do love alternating chapters more!

Overall, The Hunted was thrilling, gory, emotional and terrifying – just as I’d expected! I loved the characters Higson’s focused on for this instalment, and the story was so original and clever, with a genius ending that’s gotten me really eager to read the last book. There’s a lot of foreshadowing for the events in the next title, and I would talk about them more but I’m scared I’ll give spoilers… I’ll just say that I can tell the final book is going to be incredible. If you haven’t yet started The Enemy series, I highly recommend you do – and if you’re up to date on it, it’s definitely worth rushing to the nearest book store as soon as this is released later this week! (:

I received a copy of The Hunted from the publisher, in exchange for a review. In no way at all did this affect my thoughts.

1 thought on “Book Review: THE HUNTED by Charlie Higson”