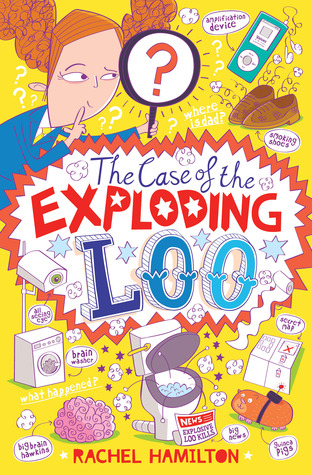 Goodreads Synopsis: Quirky twelve year old Noelle (Know-All) Hawkins may be one of the brightest girls in her class but even she can’t explain how her dad, wacky scientist Big Brain Brian, spontaneously combusted while sitting in a portaloo. It’s true that he was working on a new top secret Brain Ray machine and was on the point of a great break-through when he vanished – could this have had something to do with his disappearance? Know-All is sure all is not as it seems and with the help of her sister Holly she is determined to find out what really happened to her dad!

My Review: I started The Case of the Exploding Loo really excitedly, as I haven’t been reading many MG books lately, and this looked really quirky and funny. It definitely was! I ended up reading it in two sittings and I really recommend it if you’re looking for a really clever, giggle-inducing novel.

The Case of the Exploding Loo follows young, smart and inquisitive Noelle as she tries to uncover the reasons behind an exploding toilet that’s supposedly killed her dad, after starting to find lots of suspicious activity around her neighborhood. The plot is so wacky and crazy, with brain washing rays, lots and lots of portaloos and suspicious teachers. It’s completely unpredictable!

I don’t think I’ve ever read a book that’s full of so many things that worked so well. I really loved reading it; once I started it was actually quite hard to put down; there’s a new clue every few pages. It is quite a fast paced book, which made it a little hard for me to gather everything at first, but I did get used to the pace and was able to follow the story quite easily.

Noelle was such a brilliant main character. She’s nicknamed “Know-All,” a play on her name as she’s a bit like a human Google- she’s pretty dorky. That made her really fun and loveable. I really loved her inquisitive nature. I hope there’s another book based around her in the future, because I found her so adorable!

Overall, I really enjoyed reading The Case of the Exploding Loo. It’s a fun, quirky and genius début novel, from an author I’m sure will have many more hilarious books out in the future. The story has not just a memorable protagonist, but also lots of funny punchlines and a clever conclusion. Being quite scientific, it remind me a lot of the Doyle & Fossey: Science Detectives series for children- which was awesome because I adored those books a few years ago. Recommended if you want something that’ll make you giggle! (:

I received a copy of The Case of the Exploding Loo from the publisher, in exchange for a review. In no way at all did this affect my thoughts.

4 thoughts on “Book Review: The Case of the Exploding Loo by Rachel Hamilton”