Published 1st May 2014 by Andersen Press. 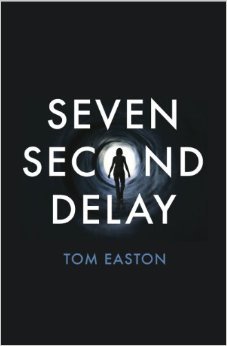 Goodreads Synopsis: Mila has 7 seconds. 7 seconds to fight. 7 seconds to escape.Seeking a new life on the futuristic Isles, Mila’s time runs out – she’s captured by Agents, who implant her with a phone that broadcasts her every move. Now she’s on the run, hounded by an elite fighting force who is convinced she poses a dangerous threat to society. Her only advantage: a seven second delay.It’s a race against time.

My Review: Seven Second Delay was such an action packed, and thrilling read!I was looking forward to reading it, and wasn’t let down, though I wasn’t entirely sure at first how I’d find it , a dark dystopian, after having read Easton’s more contemporary, funny book!

It did take me a little while to understand the world; it was about a hundred pages before everything was explained fully. However, the rest of the book did make up for that! The plot is so interesting. The beginning of the book has the reader as clueless about what’s happening as Mila, the protagonist, so it’s really riveting to piece together all of the information along with her. There were a lot of unexpected twists and turns; I honestly didn’t know what was going to happen on the next page.

I really loved Easton’s writing. He laces his chapters with tension and drama. It’s quite a fast paced book, set over a relatively short period of time, too. Seven Second Delay is pretty addictive, full of narrative hooks. I enjoyed all of the flashbacks woven around the story, that focus on Mila’s life before she’s captured by agents. They let me get to know Mila really well. I would’ve liked more flashbacks, though, because they were brilliant and gave good insights into the other areas of the futuristic world the story is set in. The book is shorter than I’d expected at just over 300 pages. I was left wanting to know a bit more about the world (hint, Tom Easton… sequel…? 😀 )

Overall, Seven Second Delay is a really action packed, fast paced book. It’ll definitely appeal to fans of Charlie Higson, and Anthony Horowitz! I really liked the characters. Mila is great- she reminded me a lot of many other awesome dystopian protagonists, namely the ones in novels by Emma Pass. I really loved the concept of the world, it’s so unique and clever. I would have loved a bit more about it, though… I’ve given this 4 hearts, but i’m really going for 3.75 (I’m awkward 😀 ) because it’s a brilliant read but I wish it could have been longer 🙂

I received a copy of Seven Seocnd Delay from the publisher, in exchange for a review. In no way at all did this affect my thoughts.