This week has been awesome 😀 I’m so excited to start the books I received. Also, lots of really cool things have happened very recently, so I’ll chuck them on the end of this post, just because (: 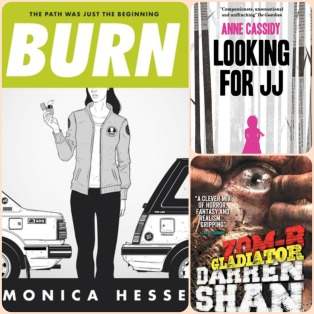 BURN by Monica Hesse: I squealed so loudly when I opened up this! I fell in love with STRAY, the first book, last year. I’ve been waiting for ages to see what’ll happen next to Lona! Since it’s been at least eight months since I read STRAY, I’m re-reading it now, then I’ll be moving straight onto this afterward. I’m so excited, and I love the cover so much- thank you, Hot Key!

Looking For JJ by Anne Cassidy: I received a copy of the sequel to this, at Hot Key’s last blogger’s meet-up. It sounds so interesting, but I haven’t read the first book yet (published by a different company).  Hot Key had a few copies of the first book to send out, so thanks so much to them for the copy of this. I love the anniversary cover, and the concept seems really brilliant. Looking forward to both this and the sequel!

ZOM-B: GLADIATOR by Darren Shan: I’m a huge fan of the series, and this was published right at the start of the year. I had completely forgotten! Shamefully, I bought it online *hangs head* but truthfully, I couldn’t find it in a bookshop! This came today and there was much fangirling. The cover really cool  and awesome… in that grim, macabre, disgusting kind of way. I’m twisted. Meh. I can’t wait to start it! (:

Onto the awesomeness of the week! 😀 This was going to be put in a random post tomorrow but… I changed my mind and decided to have it here instead. For no apparent reason (:

I found out about some new book cover releases, for books I have been waiting so long for! This week involved a lot of squealing. Much of the squealing probably went toward City of Heavenly Fire’s gorgeous cover… Also, Goose and The Black North’s cover releases were totally unexpected and stumbled upon via twitter, so that was seriously awesome! Here they are. In all of their prettiness. *squeal*

One more little bit of cool stuff! 😀 My dad frequently writes book reviews for the Croydon Advertiser, a SE London newspaper. He sent one off my book reviews to see if I could try reviewing in there… And it was published this week! So, hopefully I’ll be posting some more book reviews in the newspaper. It was so cool to see my review of Boys Don’t Knit in print! Huge thank yous to the newspaper and, or course, all of the lovely people who tweeted me after I tweeted out a picture! (: This is what it looked like in there, but it’s probably hard to read- so you can view my review, originally posted on this blog, here. 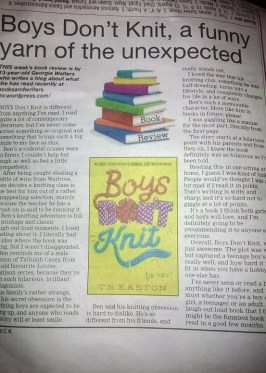 So, that was a very diverse book haul/ bunch of cover reveals! ;D What are you most excited for, out of the new upcoming books I mentioned? Or have you read any of the books I’ve received? Leave a comment! (: