(re the title: Don’t take this literally, it’s the book title ;D)

By David McIntee, published by Osprey. 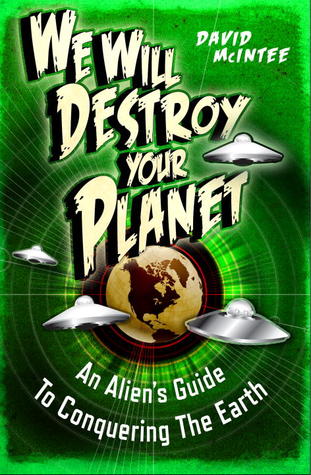 Goodreads Synopsis: Enjoy this pseudo-nonfiction, ‘how-to’ military handbook for aliens intending to conquer the Earth. Science fiction elements are satirized and then connected to real-world science, history, and military technique to show how it should be done.
It goes without saying that any military campaign must be planned in ways depending upon some basic factors: The logistics of where your enemy is in relation to your own forces, environmental factors, and, most importantly, ‘why’ you’re fighting this campaign. This book intends to take these basic factors, and apply them to the purpose of conquering the planet known to the natives as Earth.
There are, of course, many possible reasons for launching a military campaign against such a planet. The form of your campaign, and the formation of its strategic and tactical policies will very much depend on your reason. Obviously the campaign to destroy all sentient life on a planetary surface will be very different in character to a campaign to, say, bring the local population into the fold of your empire or federation – and, frankly, a lot simpler.
Once the reason for conquest, or destruction, has been determined, the book will take a step-by-step approach to the best way to annihilate humanities resistance and bring them to their knees.

My Review: I requested this book because I actually thought it would be a little like the some of the books I loved when I was smaller. I had this one handbook called Vordak the Incomprehensible, for super-villains, which outlined how to conquer the Earth in a light, funny manner, for younger kids. That was what I was expecting from We Will Destroy Your Planet- though what I actually received was something a lot more complex, and… heavier, I guess!

I dived into the book thinking it would be a children’s title, though it’s much more suited to sci-fi loving teenagers and adults. That isn’t because of the content- I just found that everything was written in a more complex way than I had expected. It actually seemed like a very serious book! (Watch out, I have all the knowledge of how to take over the Earth now!) My first thought was i’m not going to enjoy it as much now. I was looking for an MG read! However, that didn’t mean I hated this. It was actually a pretty brilliant book, and there was a bit of humor thrown in too.

The book is split into different sections outlining everything about taking over the Earth. Information on military organisations, Earth’s inhabitants and atmosphere info, weapons and attacking methods. It was all really in-depth and I found that quite fun! As a bit of a science geek, I really loved reading it. There were points where things were just too heavy for my liking: parts that were purely scientific information, and were generally confusing. There were a lot of parts I was really absorbed into, but at some other points, I did feel like the author was just dumping a lot of information on the page, cramming it all in. A few parts could have definitely been worded to be more enjoyable!

The illustrations really livened up the book. It reads like a non-fiction piece of work- that was quite cool! – so the illustrations, I weren’t originally expecting. They were really, really awesome. I really loved the illustrator’s work! The rich sci-fi drawings broke down the book a bit and brought the content to life.

Overall, We Will Destroy your Planet was a fun read, though it wasn’t exactly what I was expecting. It took me quite a while to read it, because I just couldn’t get used to the writing style. It is a really great book, though! It’s the perfect Christmas present for a Sci-Fi fan. WWDYP is very in-depth to the point where it’s even a little scary… let this book fall into the wrong hands and… well, Earth’s going to get invaded! D: The last eighth of the book, roughly, is an index of alien invasions in Sci-Fi stories, and I really liked that part. My inner sci-fi nerd is begging me to go find all of the recommendations now!

I received a copy of We Will Destroy your Planet from the publisher, in exchange for a review. In no way at all did this affect  my thoughts.

2 thoughts on “We Will Destroy Your Planet”