I don’t usually read anthologies, but this caught my eye in Foyles in London, months ago! I’m really glad I’ve gotten around to reading it, because it was a great mixture of Steampunk stories. 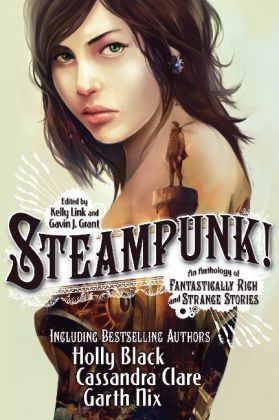 Imagine an alternate universe where romance and technology reign. Where tinkerers and dreamers craft and re-craft a world of automatons, clockworks, calculating machines, and other marvels that never were. Here, fourteen masters of speculative fiction, including two graphic storytellers, embrace the steampunk genre’s established themes and refashion them in surprising ways and settings as diverse as Appalachia, Ancient Rome, future Australia, and alternate California. The result is an anthology that defies its genre even as it defines it.

My Review: This anthology was great! It took me a while to read it, as not only, like most books, am I dipping in and out of it between lessons- but also because there were a lot of stories in there that I kept thinking about as I was reading the next one: So I had to re-read lots! This has been sitting on my shelf for quite a few months now. I’m glad I’ve had the chance to read it, because I’ve found a collection of really beautiful stories that I’m sure I’ll delve into again and again.

A lot of people will do separate ratings for stories in an anthology, but here I’m just going to cover my favourites and my least favourites.I think otherwise it would take ages, writing paragraphs about all of them- and there were quite a few pieces, as you could probably tell by all the authors at the top of this review! Firstly, I’ll get the bad-ish stuff out of the way, because I want to get on with fangirling about the awesomest ones ;D

There were a couple of stories in here that I couldn’t really get into One of them was The Glory Girls by Libba Bray. I’ve heard so many raving reviews about her novels, so I was pretty excited to read a short story of her’s… but I just really didn’t enjoy it. There were about two or three others, that I semi-enjoyed reading- though after I finished them, I couldn’t even remember what had happened. I feel really bad about that! I just found that some were a LOT more memorable than others.

Okay, now for the stuff I loved- saving the best ’til last, of course! Holly Black’s story, I quite enjoyed, because it was full of automatons, and I love automatons. Another story that I really loved was Ysabeau S. Wilce’s. I didn’t realise she was in this, as her name wasn’t on the front cover; but she was one of my favourite authors when I was younger! She wrote Flora Segunda of Crackpot Hall, which I read way too many times. Luckily, she didn’t let me down here; her story was a brilliant, classic-feel detective story with Victorian London elements. It was so chilling! Cassandra Clare’s story opened the anthology- and that made a brilliant start to the collection. Her story seemed like one I would’ve probably put as pretty fun, until the last couple of pages; wherein time travel took center stage, and added in a really clever, and absolutely heart-breaking (to me!) twist. I absolutely adored it- and I read that last paragraph again and again.

There are two graphic novel artists contributing, and their works was brilliant! The first mini-graphic novel, was pretty funny but tragic at the same time. The second one was quite moving, I found! They were really fun twists in the anthology, which is quite big at four hundred pages- so the writing is broken up in the right places with the great illustrations.

It was hard to pick a favourite! I think the best story in here was Steam Girl. Already,the title appealed to me, and I’d never heard of the author before, so I was pretty interesting in finding out what he (Dylan Horrocks) wrote like. This story, just completely blew me away. The concept was so beautiful, and the story built up this beautiful back-story to the Steam Girl- who’s in fact a new girl at a high school, who acts strange and dresses differently, who the main character meets. The story is told, largely, in stories by Steam girl; because she’s always in her own world; always writing down these magical stories and drawing pictures of Steam Girl, on her adventures in a Steampunk-inspired Space adventure. The end result was so thrilling and really tugs at your heartstrings. Dylan’s piece, and Cassandra’s, have to be the ones that stand out here!

Overall, Steampunk! is a really imaginative anthology, of original and fun stories that will have a reader completely absorbed. There were about four that I didn’t really enjoy. I struggled to get into a few, and I think it might have been because there was so much, packed into small places, in multiple cases. However, the majority were absolutely brilliant! Some of the stories are under ten pages- some are about fifty- but all of them pack a real punch in a different way. There are so many unique worlds in all of the tales, and I found myself really wanting to read more set in each place, after finishing the pieces! I’ve discovered (and re-discovered) a lot of fantastic authors, who I’ll definitely be looking out for in bookshops now. I can’t wait to read more from these- this anthology is packed with talent!

I purchased a copy of Steampunk! From a bookstore.

2 thoughts on “Spotlight on Steampunk: Steampunk!”