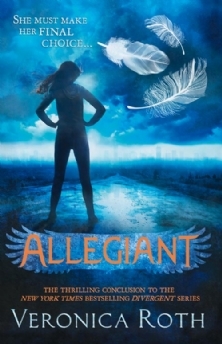 Goodreads Synopsis: The faction-based society that Tris Prior once believed in is shattered—fractured by violence and power struggles and scarred by loss and betrayal. So when offered a chance to explore the world past the limits she’s known, Tris is ready. Perhaps beyond the fence, she and Tobias will find a simple new life together, free from complicated lies, tangled loyalties, and painful memories. But Tris’s new reality is even more alarming than the one she left behind. Old discoveries are quickly rendered meaningless. Explosive new truths change the hearts of those she loves. And once again, Tris must battle to comprehend the complexities of human nature—and of herself—while facing impossible choices about courage, allegiance, sacrifice, and love. Told from a riveting dual perspective, Allegiant, by #1 New York Times best-selling author Veronica Roth, brings the Divergent series to a powerful conclusion while revealing the secrets of the dystopian world that has captivated millions of readers in Divergent and Insurgent.

NOTE: THERE ARE NO SPOILERS IN THIS REVIEW! 🙂

My Review:  How am I meant to review this? Just…. Veronica, NO! WHY? This review is going to be a very messy one, full of fangirly wails and virtual screams of frustration, just as a warning. I was so ecstatic, when I received this in the post. DIVERGENT was the first ever book I reviewed on my blog (I was eleven, it was an awful, not-even-a-paragraph review, haha) and so the series is quite special. Also, because the INSURGENT blog tour was the first ever blog tour I participated in. So it was really surreal (and SAD!) to be ending this series, as the first book is a main reason I set up my blog. It took me a while to get through it due to homework, and I was left utterly destroyed at the end!

I can’t say why, obviously- but it’s probably the saddest ending to a book I’ve ever read. I knew it was coming- I was spoiled! ): But, it still shocked me. It was understandable why the author did it, but at the same time, not!

I’ve had to delete a lot of this review- I keep going on about the ending! So here’s a summary of my emotions in one simple GIF, so I can get on with the rest of this review:

Okay- onto the dual narration: I was not expecting a split perspective, at all! I wasn’t very sure how I’d find it. Of course, I adored Tris’ narration. I love Tris to pieces- she’s such a brave, strong character, who I’ve grown to love throughout the series. However, I didn’t get on with Four’s narration, as much. I love Veronica’s writing, so it wasn’t that: I just felt that Four didn’t do that much in this book. I don’t know why! It seemed more like he was just leaning on Tris, and he played a big part in the book, obviously, but I feel that I’ve lost a little love for his character, which I’m so upset about!

In the first two books, there’s always been an air of mystery surrounding the reasons why Chicago had become a dystopian society, divided by Factions and ruled by a controlling government. Finally, we know the truth! The Big Reveal was done pretty quickly, and earlier on that I’d expected. I was thinking there had just been a war between some area in Chicago, blah blah…. they divided the city, end of. I don’t know why I was expecting that- the real reason was just… Wow! I loved the idea behind it, and it was all very clever, I think- and very unpredictable. There were no hints at all (I don’t think…?) dropped into the trilogy to make anyone guess it.

Plot-wise, the book was… okay. Obviously, it had a lot of twists in it, (THE ENDING. I’m sorry to repeat but THE ENDING). I was eager to read on to find out what had happened, after the shocking events of Insurgent. However, I found Insurgent, a little bit all over the place, in terms of plot. Whilst Allegiant had a great one, full of reveals and twists, there was a lot to process for the reader. I read this over about a week and a half (Reading only a couple of chapters per night- too heavy to take to school!) so it didn’t always have my full attention at parts. So, it might be just me!

Overall, ALLEGIANT was a conclusion to a trilogy I’ve loved that I have very mixed feelings about. Firstly, I want to cry and scream WHYYY?! at the top of my voice- because of the heartbreaking twist, and because the I didn’t like a few aspects of the book… but I do want to hug the author too, because the book was, actually, a satisfying finish, to me. It had its faults… For instance, I had to re-read lots of passages, because there was a lot to take in- and I lost a bit of love for Four in this, because I just wanted him to do something! Apart form that though, this book will rip your heart into tiny pieces and emotionally destroy you and turn your inner obsessive fangirl into overdrive. So buy it! And tread with caution. And make sure you have tissues.

It took me so long to decide whether this book deserved a 3.5 or a 4. I really didn’t like some parts, but at the same time, I’ve fallen in love with the book, and it was an epic conclusion. I know there have been many varied ratings, though!

I received a copy of ALLEGIANT from the publisher, in exchange for a review. In no was at all did this affect my thoughts.