We’re drawing closer to Halloween now… and what better book to be one of the finishing Halloween Reads recommendations than a spine-chilling, ghostly thriller? This book was terrifying- great to curl up with when you’re not trick-or-treating this Halloween! 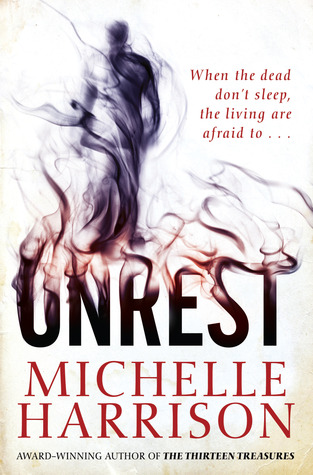 Goodreads Synopsis: Seventeen-year-old Elliott hasn’t slept properly for six months. Not since the accident that nearly killed him. Now he is afraid to go to sleep. Sometimes he wakes to find himself paralysed, unable to move a muscle, while shadowy figures move around him. Other times he is the one moving around, while his body lies asleep on the bed. According to his doctor, sleep paralysis and out of body experiences are harmless – but to Elliot they’re terrifying. Convinced that his brush with death has opened up connections with the spirit world, Elliott secures a live-in job at one of England’s most haunted locations, determined to find out the truth. There he finds Sebastian, the ghost of a long-dead servant boy hanged for stealing bread. He also meets the living, breathing Ophelia, a girl with secrets of her own. She and Elliott grow closer, but things take a terrifying turn when Elliott discovers Sebastian is occupying his body when he leaves it. And the more time Sebastian spends inhabiting a living body, the more resistant he becomes to giving it back. Worse, he seems to have an unhealthy interest in Ophelia. Unless Elliott can lay Sebastian’s spirit to rest, he risks being possessed by him for ever, and losing the girl of his dreams…

My Review:  UNREST was an awesome ghost story. Right from the beginning I was captivated by Michelle Harrison’s terrifying plot! This book’s perfect for a Halloween read- or if you want a serious scare…
Plot wise, the book was brilliant. It’s a bit disappointing, actually, that the synopsis gives quite a lot away. Without that blurb on the back, it would be utterly unpredictable. Apart from the parts of the book it talked about on the blurb though, it was very hard to predict! I wasn’t expecting any of what happened. Michelle is an expert at writing terrifying, layered plots, packed with plot twists.

There were a lot of intertwining parts of the story, and I was kind of scared that ends wouldn’t tie together very well. It was less than a hundred pages from the end, and not much had been resolved… there was the mysteries behind Hodge; Ophelia; Tess the ghost; Sebastian the ghost… I was scared things would be forgotten and I’d be left wanting more of the story. Well, everything was resolved and linked together in a way I can’t describe in words other that genius, and I was left wanting more for a GOOD reason!

Michelle’s writing was brilliant. I can’t remember much of her writing style in the Thirteen trilogy, sadly, thought I can remember loving those books a couple of years ago. UNREST was written superbly. Harrison’s writing conveys so much tension and suspense, and I felt like I was there. I know I probably say that a bit in reviews, but this time it was vivid- I really did feel like I was watching Tess in an out of body experience; I felt like I’d had my body stolen by Sebastian; I felt like I was watching ghosts appear on a museum tour. I found the writing so descriptive and beautiful.

Elliott was such a flawless main character. He was very realistic, and his background was really well explained. I knew exactly what had happened to him, and it made me sympathize with him throughout the whole story. His story was riveting, and scary- I’d never be able to confront ghosts like he does, in this book! I adored his relationship with Ophelia: She was, too, a really amazing character. They’re both really unique protagonists. I want to read more about them! (Hint, Michelle Harrison, hint! :D). There were multiple points when I didn’t trust multiple character. A main one was Hodge. I can’t really detail on this- but I’ll just say that some characters can’t be trusted…

Overall, Unrest was a novel I absolutely loved reading, and it’s a book I think I’ll re-read again and again. The character were unforgettable, and I didn’t want to let them go at the end of the book. The setting was interesting, and so was the ghostly aspect of the book. I’ve also gotten really interested in the subject of out-of-body experiences now! The plot is complex and clever- the twists and turns in the story will get you hooked on this book. It’s a great novel as a standalone- I don’t think anything should be added, in fear of spoiling the story- but I want to read more at the same time! I can’t wait for more books from Michelle Harrison. She’s a fantastic author… I’ll stop now. I’ve written a long enough review!

My Dad received a copy of UNREST in exchange for a review. Then I stole it a while after to review it myself. In no way at all did this (The source, not the stealing-from-Dad’s-bookshelf, obviously ;D) affect my thoughts.