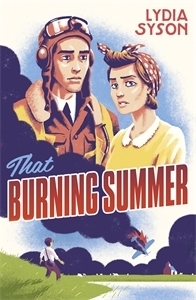 Goodreads Synopsis: Romney Marsh, July 1940. When invasion threatens, you have to grow up quickly. Sixteen-year-old Peggy has been putting on a brave face since the fall of France, but now the enemy is overhead, and the rules are changing all the time. Staying on the right side of the law proves harder than she expects when a plane crash-lands in the Marsh: it’s Peggy who finds its pathetic, broken pilot; a young Polish man, Henryk, who stays hidden in a remote church, secretly cared for by Peggy. As something more blossoms between the two, Peggy’s brother Ernest’s curiosity peaks and other secrets come to light, forcing Peggy and Henryk to question all the loyalties and beliefs they thought they held dear.

In one extraordinary summer the lives of two young people will change forever, in a tense and gripping historical drama from Lydia Syson, the author of the acclaimed A WORLD BETWEEN US.

My Review: That Burning Summer definitely lived up to my expectations! I loved Lydia Syson’s A World Between Us and it’s felt like an age, waiting to read her next book, because I was so excited for it! We’ve moved away from the Spanish civil war, onto the Second World War as the backdrop for this book, and it was just as intriguing. As well as a really interesting time period for the book, I also loved it because it was set in a place I’ve visited a few times- Romney! I’ve been on holiday a couple of times round there, so I could envision it in the World War quite well, which I think made me enjoy reading it a lot.

The writing was just beautiful. I was transported to the world so easily, and didn’t want to pull myself out of it. I read huge chunks of this in school at my library… multiple times I was almost late for class, because I just couldn’t stop reading! It was written so well in third person, though I think first person would’ve suited this book well, too. Between every few chapters, there was an Rule from a guidebook on what to do should the enemy invades. I really loved having those extracts in there, as it compared to what Peggy was doing for the fallen flyer. Well, it was the opposite really, but technically he wasn’t the enemy!

Peggy was such a great main character. She was a believable teenager, and I adored the love story between her and Henryk, the pilot who fell out of the sky. I think I loved her because even though she had no proof that Henryk was who he said he was, she would still help him by stealing food from her own farm, when they needed it. I also adored her little brother! Ernest was such a sweet little kid, and he played an unexpected part towards the ending, involving a pretty shocking birthday present for a twelve year old.

Henryk was also a really great character. We only really get to know him through his conversations with Peggy, that take up a lot of the book, as he’s hiding out in the Church. His story was heart-breaking and makes you want to go jump into the story and give him a hug. Lydia Syson has created a book that’s like a window into the lives of people in the second world war. I felt like I was there, living through what Henryk did!

Overall, That Burning Summer was a second brilliant YA novel from one of my favourite historical fiction authors! It was set in a time period that I really love learning about, so that attracted me to it, and Lydia’s created yet more unforgettable characters that I enjoyed reading about so much. The ending was very satisfying and sweet, and left me imagining for days about how Peggy and Henryk were getting on. One word to describe this? Unputdownable. It was such a great read, that I’m definitely going to be recommending to anyone I know who likes historical fiction!

I received a copy of That Burning Summer from the publisher, in exchange for a review. In no way at all did this affect my thoughts.

6 thoughts on “That Burning Summer”