I read THE RIG about a month ago, and it’s one of the best books I’ve read this year. I read it because it was one of the winners of the Hot Key Books/ Guardian Young Writer’s Prize, 2012. The very awesome Joe Ducie, author, agreed to answer a few questions for me as an interview post! Questions range from writing THE RIG to the setting and characters. Joe has some great answers! 🙂 Firstly, about Joe Ducie: 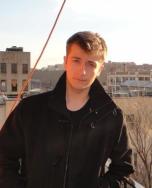 He is primarily a writer of urban fantasy and science fiction aimed at young adults and, when not talking about himself in the third person, enjoys devouring books at an absurdly disgusting rate and ambling over mountains. Preferably at the same time. Follow Joe on Twitter: @joeducie

• How long did it take you to write The Rig?

I hammered out the first draft to The Rig in about 11 intense days. The story was written with the intention of submitting it to the Young Writers Prize, and the way that competition was laid out meant I only needed the first 4,000 words to enter.

So enter I did, in April 2012, and then promptly forgot about it until September when Hot Key Books sent me an email asking for the rest of the draft! Huzzah!

I did not have a draft, but the opportunity was far too good to pass up, and I’ve always worked better on a deadline. So I strapped myself into the writing chair – up in the Canadian Rockies, where I was working at the time – and didn’t look up for the best part of two weeks. The story fell out of me, piece by piece, and actually came together into something I liked.

Of course the draft I submitted ended up needing a lot of work to bring it up to scratch, but the story itself was complete and sound—better, it was fun—and I was thrilled that Hot Key saw something in it.

• If you could go back and edit one thing about the book, what would it be?

Hmm… there are one or two things happening in the sequel that I would have liked to mention in the first installment, but there was no opportunity, given the remoteness of the Rig, to introduce this information naturally. Had I put it in, the extra detail would have looked glaringly obvious that I was foreshadowing. And foreshadowing should never look like foreshadowing.

• What triggered the whole idea for The Rig, originally?

A dream, actually. A dream of kids on an oil rig prison. Pretty much what ended up hitting the page, right? The best ideas seem to strike from the ether like that, entirely unlooked for and rough around the edges. Bit of polish and two weeks of relentless writing and I had myself a small, hopeful diamond of a story.

• Were any of your characters based on real life people, and is any of Drake based a little on yourself?

I like to think I’m as cool and witty as Drake, oh yes, but he’s probably more like my brother than me. Heh. Tristan’s cleverness is something I see in a lot of people I know. Irene’s kindness and the wildfire in her heart is something I try and surround myself with. Funny thing about characters is I sometimes don’t even see the similarities to people I know until we’re ¾ into the story. What gets me is the name of the character, every time. In The Rig, Tristan was originally called Matthew, and Irene was going to be Grace. But those names jarred when I read the draft. As soon as I changed them to what you see in the final copy, they felt more real to me. Something clicks and you think, of course, that was always their name.

•Did Drake really escape from one high security prison because the front door was unlocked? (To people who haven’t read The Rig: Drake insists this happened, but no one seems to believe him!)

Heh. Secrets, secrets. I’m not even sure I know how Drake managed to escape that one! He’s got bigger problems coming his way in the follow-up. Problems that are going to require his considerable resolve and wit.

•Why did you decide to set the story on the Oil Rig?

Well, kind of like the thing with names, an oil rig just felt right. We’ve got this hotshot young kid, Drake, who has escaped from three of the Alliance’s land-based facilities without really breaking a sweat. So short of putting the prison on the moon we needed somewhere that had to be remote and, from the start, inescapable.

• Finally, could you give any hints to readers here of what’s to come in the sequel?

Chaos—pure, raw chaos and more than a touch of heated romance. Adventure, trials, tribulations—love, loss, and all manner of mischief. The conflict started in The Rig has only just begun!

Thanks so much for the brilliant interview, Joe! I’m sure everyone is looking forward to reading your book, and I’m looking forward to the sequel! Today, THE RIG is published, by the way! Woohoo! So, if you’re looking for a full review of Joe’s book, you can read mine HERE, before rushing off to a shop to grab a copy. 🙂