I couldn’t get a good picture as I was far back and had a bad zoom- but here’s Sally and Laura!

On Wednesday, I went to the Celebrating Difference event at Waterstones Piccadilly! The event was chaired by a lady from Booktrust, and the theme was discussed by three amazing authors, whose books I’ve adored: Sally Gardner (talking about Maggot Moon), Laura Jarratt (talking about Skin Deep) and R. J. Palacio (Talking about Wonder).

All three author’s books had protagonists who were different from the average person; who stood out. Wonder and Skin Deep featured main characters with facial disfigurements, and Maggot Moon was about a misunderstood dyslexic boy. The discussion was all around these characters, and the authors discussed lots of things to do with them.
One of the first questions they were asked was why they decided to write about

characters who were different through facial deformities and dyslexia. Raquel Palacio’s reason stood out, to me! She said that she’d seen a small girl, with a cranial facial deformity, some years ago, and her child had reacted with fear, being scared because he wasn’t used to seeing people who were different in that way. It inspired Palacio to write a novel, featuring Auggie who has the same condition, and her book focuses around how people react to the condition. It was a very thought provoking answer!
The authors also went on to discuss crazes, which got quite funny at parts, with Sally making the audience laugh with her comments about Wizard Hats Not Being In Fashion! (Not a Harry potter hate thing- it was just pointing out that Wizards were being abandoned for vampires!) All three authors, especially Laura, said they’d never really followed crazes, but written books that were different to current trends (like vampires or dystopia, etc.) and that seemed to make them stand out.
Then, there were also the questions that lead to the authors talking about how some subjects inclusive of people who are considered different didn’t seem to sell at first. I think it was Laura Jarratt who said that an earlier novel she’d written featuring gay characters some years ago was given feedback by an editor; saying it wouldn’t sell partly because of the characters. It was actually quite shocking, to hear that some of the author’s books were looked down on because the characters were a little different to some others! R. J. Palacio commented on that, saying LGBT and other types of books along the lines of Celebrating Difference are catching on in the States. Maybe we’ll see more unforgettable books about varied people very soon in the UK, then? I can;t wait for these to hopefully come over to this country!
The discussion, wholly, was so interesting! I really loved the whole event. There was also a book signing afterwards by the three authors. I was lucky enough to get Wonder and Skin Deep (the only one I hadn’t read, but will soon!) signed. I also got my ARC copy of Maggot Moon signed… again! I met Sally last year at a Hot Key bloggers brunch. She let me be greedy and have the next page of the book signed 🙂 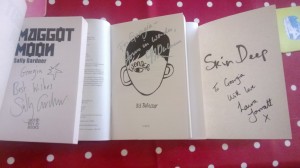 Whoop! Signed books! I especially liked the message in Wonder: the author had this awesome sparkly silver pen 😉
As well as meeting the lovely authors briefly, I also met some other people! When I arrived I bumped into Debbie from Snuggling On The Sofa, who I chatted to for quite a while and sat next to for the discussion. Also, I met Daphne from Winged Reviews, who was really lovely, too! After the talk I had a chat with Olivia from Hot Key, in the signing queue- it was great to see her again! I also said a very brief hello to the brilliant Harriet, who has sent me some books before at Random House.
In all, the Celebrating Difference event was really great! I enjoyed the discussion so much. It was funny at points, and also very interesting. I loved meeting the lovely bloggers, publishers, and authors, too- so a big thanks to Waterstones Piccadilly for hosing such a brilliant evening!